May 1985 - The Enchanted Journey, Alien Armada 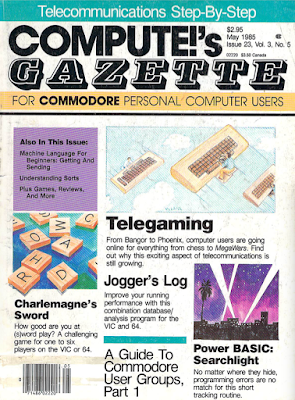 Oddly defensive and long Editor's Notes talking about why sometimes the same program will show up in COMPUTE's Gazette and COMPUTE!. I'm not sure if some people subscribed to both and were mad about paying twice for the same thing or what.

First half of a long list of Commodore User Groups printed here. A logging program for joggers and a thing on various computer Sorting techniques round it out.

One of the VIC games this month needed an "expanded" VIC, so instead of double clicking on xvic in OSX finder I had to cd to VICE/xvic.app/Contents/MacOS and then typed
./xvic -memory 8k

This VIC-only game is... I don't know, I think it's supposed to be an Arcade-y RPG-ish kind of thing. It has Boots of Brickwalking, Wand of Secrets, Singing Globe, Holy Cross, Wand of the Way, Keys (Blue and Purple), Axe, Torch, Ordinary Door, Secret Door, Keyhole for Invisible Doors, Transporters, Zombies and Chesire Bobcat (Niiiice), Boa Constricter Brick Monster, and Thieves. And is very into phantom items that try to fool you. Unless you have the Wand of the Way.  To be honest I didn't get that into it. I appreciate the ambition but it's pretty slow and confusing. Rating:2/5

This game (for both C=64 and VIC) in a completely different genre, also had an attitude of "throw everything against the wall and see what sticks". It's like Space Invaders, except the legions just sit there, transmorgifying through 3 forms as you hit them with your laser until they're vaporized. But most of those invaders you can ignore, you only have to hit the ones in front of the mothership. (I like how it has "UFO" inscribed on its forhead. But isn't that a bit self-contradictory, to be self-identified as a *U*FO?) Seagull looking things flap slowly down, dropping bombs you can destroy, but you'll hardly notice, because the #1 threat (making a constant annoying whistling sound) is a "smart bomb" that launches from whichever invader you're underneath, keeping you constantly on the run. I got through one level and a second kind of smart bomb that tracks diagonally across.  Overall, at least on the easier levels, it's not too hard, but kind of grind without much payout. Rating:3/5