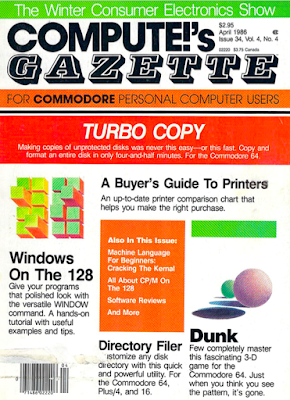 Editor Notes them playing with an early CD-ROM, albeit one hooked up to an IBM-PC. He really up-plays the paradigm shift nature of it (though the other game-changing reference point is Atari 8-bit Star Raiders.


Here, in this room, in this small box the size of a child's record player, one can place a compact disc that will store, for access by your own personal computer, 600 megabytes of data. That almost is beyond imagination--600 million bytes of data. The same size unit, with floppy disks, for a Commodore 1541 disk drive would require roughly 3,615 diskettes.

There's an article on the Winter CES, with Commodore notably absent. It talks about GEOS, the new roughly Mac-looking operating system for Commodore. (Oh and the cover feature "Windows on the 128" is not the kind of Windows you may be thinking of.)

Reviews of "Elite" and "Little Computer People" and "Ultima IV". The first was simply astounding with its hidden line 3D graphics, and LCPis such a cool and hip idea- kind of like a more human Tamagotchi, except your LCP wouldn't die and in fact was uniquely generated at first boot, and then persisted.

Oh and look, another damn guide to printers.
This game is a bit crap, not up to these guys' usual standards. Balls drop from the top, and you bat them around with your wireframe boxes on the 3 platforms (at first controled in unison, but I guess after you score some points the control of the top and bottom layers gets more wonky.) This game, already a tough exercise in multitasking, is made much more difficult by the odd interaction of the wireframe boxes you control and the balls... they're semi-solid, you can't quite rely on them like an air hockey mallet, and when you move to the ball, you kind of nudge it around a bit... very unsatisfying. Plus, a ball that you accidentally push off the side (where it will fall and score no points) is impossible to tell at a glance from a ball falling in a more useful way, so it's visually confusing as well and hard to tell what to focus on. Rating:2/5