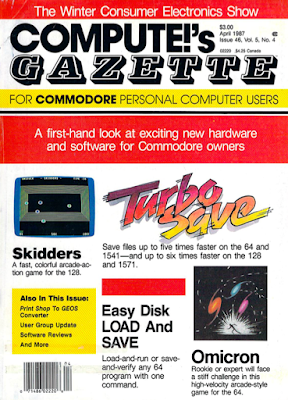 Editor Notes praise the continued strength of the Commodore line, and the feature is Winter CES - including the Amiga 500, which had a much better price and more power than the 1000 that preceded it.

There was also an interesting little toy called "Improviser" included in this, using some math to try to the C=64 to make tunes that were a bit better than purely random...
Sean, Sean, you're killing me! This game is one tweak away from being a 5. It's a cousin of the arcade game Omega Race, sharing that game's Asteroid-y physics in a distinctive bouncy arena with the game info inside the center. A surprisingly large amount of enemies (Wagle did Star Dragon in June of the previous year, a terrible game but a good multi-sprite tech demo) do a slow orbit around, generally harmless but dropping a variety of mines, but some transform into a fierce warrior, firing in all directions, and if the level goes on too long the fierce warrior is even more of a berserker. (Also, the background tiles with the arrows flowing up is appealing.)

Now, arcade Omega Race (Oddly, my church in Cleveland had one in its rec room) had an interesting control scheme: a spinny dial for direction (with infinite rotation, no stopping points) and Asteroids-y thrust and fire. This control scheme is a challenge to port to joystick-based consoles: in fact, the Atari 2600 came with a special "booster grip" to attach to the top of the standard Atari controller to give it an extra button. Omicron compromised in the ability to "fly one way, fire another" by letting you change momentum in any direction at will, and if you hold the fire button you're firing in a constant direction - until you press the button and hit the joystick at the same time. I feel this would have been a much more joyous game if you were always firing (there's never a reason not to, really), able to change your position while keeping down a steady flow of bullets, and then only using the button to change your firing angle. This game has a terrific kinetic bounce to it, but with the control scheme as it is, you have to rely too much on that bounce to strafe and hope, and can't adjust your position without throwing off your angle. (Possibly the current control scheme is masking some trouble in setting difficulty otherwise?) Rating:4/5
Huh... another 128 BASIC game, terrible in some of the same ways last December's "Moon Rescue" was terrible - sprites that move semi-smoothly but in chunks, emphasizing the collision detection, or rather, not having the collision animation shown until it was time for the next "chunk". (You know, looking into it a little, there was a 128 MOVESPR command, so I think these programmers are using that rather than moving and detecting collisions in frame-size bites.) Anyway, the instructions say you're 1 of 5 "skidders" trapped in a "closed universe", and your friends have gone crazy throwing themselves across looking for an exit, and if they hit you you die. Cheery! But you "win" if you survive 'til the timer reaches 100% (the instructions don't explain what cosmic freedom that represents.) Also you're slowed down tremendously if you hit the yellow boundary lines, though your insane friends are not affected. Rating:2/5