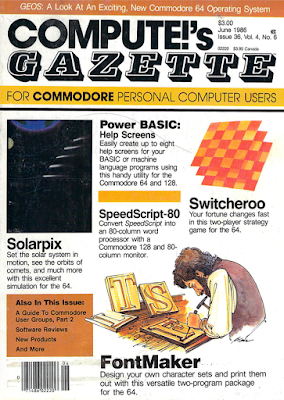 The Editor's Notes follow up to an earlier request for feedback on a variety of topics, including what do you do with old stuff (like VIC-20s at this point... it has been a while since we've seen a game for that, or at least one that's not generic for Plus/4, 16 and C=64 as well.)
A teacher from Frankfort, New York mentioned a bunch of hardware including a Timex (Sinclaire I assume):


The Timex is in a Corn Flakes box, with an advertising page posted on the outside showing the price of $250. We use it in lectures to show that computers may one day become premiums in cereal boxes.

Anyway, big reviews of GEOS. It makes me think about the difference in specs vs the first Mac: half the memory, and a chip that ran about 1/8th the speed. Still, I think GEOS was considered pretty decent.

There's an article on the evolution of Commodore graphics that amusingly has a toboggan scene from Winter Games upside down, and a "screenshot" from Summer Games II that is clearly a mockup.

Less of a game, more of an interactive tech demo. This game puts 16 sprites on screen "at once" instead of the usual 16 via the power of flickering. A simple chain of throwing star look sprites flies around the screen, you avoid it and fire at it with your spaceship's gun (only the first one is vulnerable) Even more points off for shunning joystick support for + and - move, ctrl fires. Rating:1/5
Another "not much of a game" but a bit more conceptually interesting... press the top left or top right key on the keyboard, and the computer will try to predict which way you will press, based on the pattern you've made up to now. Rating:2/5
Tic-Tac-Toe on a 5x5 grid, but each turn the player has an option to slide a row or column 1 space (with the furthest piece wrapping around.) One thing I noticed was the UI was particularly bad, even given the limitations... every turn the player has to press left or right to select "add piece" or "move", and the only indication which widget at the bottom is selected is a color change. Adding a piece is straightforward with the cursor on the board, but a slide uses the same cursor, pressing the button, and then pressing the direction to move.

Just for geeky fun, and because I didn't feel right subject a playtest buddy to this UI, I made a browser-based version of this game with a better UI (click on an empty square OR any of the arrows surrounding the board, which I think the makers of this game easily could have done.) At my playtester's suggestion I also developed a 4x4 variant where each player places a piece AND selects a row or column to slide every turn, until the board is filled and then it's all slides.