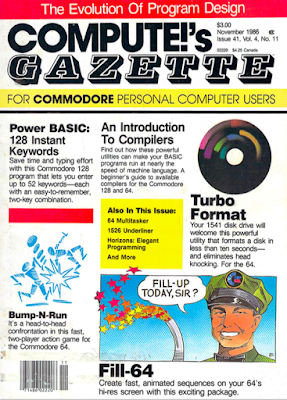 Not much to this issue. Some big names in computer game writing are quoted in an article, a lot about the transition from super-cramped programming environments (memory-wise especially) into less cramped ones, and a thing on compilers. The more I read, the more I'm amazed that interpreted languages were the standard for the era.

Ooh, and a series of 3 hard-hitting ads for the Atari ST! Complete with Jack Tramiel's signature... 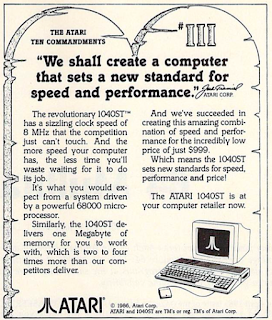 I need to test this 2-player-only game out with a buddy, but right now it just feels like a hohum, minimalist soccer-ish game. (Come to think of, I think the mechanic is VERY similar to Ball Blazer but with graphics 1/10 as interesting) You push around the field, there's a bit of physics (though the acceleration curve feels particularly hockey-stick shaped), every time you bump the opponent control off the ball changes, and you can press fire to release it. Tentative Score:3/5
It's Surround, in BASIC, for the 128. Rating:1/5

A puzzle game, not unlike "lights out" but wonky. Only the red squares are clickable (so if you ever make the thing blank, you're out of luck) and the rule for squares changing colors are oddly assymetrical. There are 5 puzzle goals to try out with random starting states. Rating:2/5