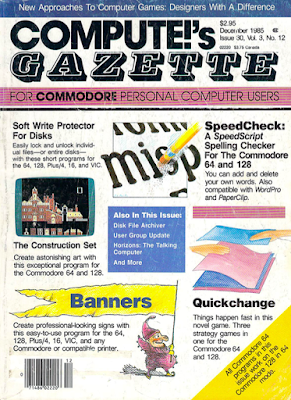 Another Editor's Notes kvetching about the lack of pre-release hardware etc for the Amiga.

The banner feature article on New Approaches to Game Design was pretty cool - making games in different forms and to reach different audiences is always a nice goal. (I think "Little Computer People" is the best-rememebred game the article goes over.) Also, a nice little thing on Bill Budge's Pinball Construction Set, which has always seemed particularly technically impressive to me. (It mentions Bill Budge working on "Construction Set Construction Set" - wonder if anything ever came of that.)

This issue had "Banners" (kind of like "Print Shop", but lower-rez by the looks of it), "The Construction Site" which is a rather nice "draw-via-rubber-stamps" style art program (with different sets for houses, creatures, etc) and then "Speedcheck"... the spellcheck where you provide the dictionary.

Anyway, moving on...
This game, kind of an upside-down "Breakout" variant, is a kind of tough to judge. It has mesmerizing sound and a central whirling animation that fascinated me as a kid, but the tuning of the game is poor... even the regular mode is super-difficult because they made control of the bird-paddle have a lot of inertia/momentum, and so the character by character animation of the ball is especially jarring.

But man did I love that animation! One cool thing about Sprite Magic is that it didn't clear memory when it loaded, so by stopping this game and loading the sprite editor I could see the individual frames and admire the 3D-ness of it. I loved it so much that I spent a happy hour or two making a program to extract it as an animated GIF:

So I'm going to give it nostalgic extra star, between my love of that graphic and the cool sound, and the fact that maybe if I had more patience to struggle with it it might be a more fun game than it seems. Rating:4/5
The Mykytyn/Tuttle duo strike again! These guys have some interesting ideas, but they tend to make difficult games even harder by adding arbitrary timers. I'd guess that it's a way of increasing the replayability, but it's frustrating. Also, I'm not sure if it's the crappy-ish gamepads I'm using (hm... after getting burned by these breaktastic Atari-style USB sticks I think I'm going to try an actual Atari to USB adapter, just for the sake of it) but sometimes their games would benefit from more precise control... they insist on block-accurate positioning, but it's very easy to overshoot.

Anyway, this game reminds me of the more advanced levels of Q*bert, where you hop on a square to change its color, but then it toggles back on repeated hops. Little cursor-y enemies patrol at irregular speeds, horizontally back and forth. There are 2 variants beyond the basic "Flip Flop" mode: "Missing Pieces" has parts of the board missing... enemies ignore the absence but it's deadly to you. "No Turning Back" kind of turns the tables... each square disappears once you leave it, blocking both you and the enemies. There's a satisfying sound when you trap an enemy and it dies, taking the square with it, but the whole thing is enormously difficult.

If these guys had balanced the difficulty a bit differently I might be handing out my first 5-stars, but for now: Rating:4/5 (Also, I wonder if the graphics could be a bit less minimalist... if each enemy was displayed as the inverse-colored > of the way it was going, that probably would have been an improvement.)
I really liked the character-graphic art of this game, but it suffers from synax and "illegal quantity" errors in the code, and a general kind of pointlessness. You're wondering around a dungeon, most of the rooms have traps that have a dragon, a sword, gold, or water (I guess the water is why you open the doors at all rather than just try to find the exit, or you're greedy for gold.) If it's a dragon, you have a split second to jam on the appropriate room-leaving key. Rating:2/5