It's been a year since I finished, but I have fond memories of making this blog in 2015, and thought it deserved a wrap-up article. 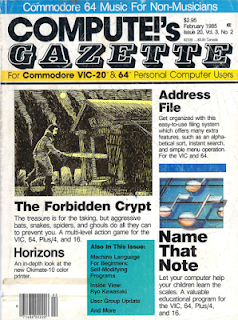 Computers were different in the 80s. Before the internet, magazines provided about the best way to get information, reviews, and maybe most importantly, original type-in games.

(What a concept, right? That kids and grownups were encouraged to use the keyboard on that machine right in front of them to type in new things to teach the computer to do! You could even get make up your own things! It was empowering. I mean most kids just traded pirated floppies of commercial games, but still - the gateway for programming was open, and many would stroll on through.)

One of those magazines was "COMPUTE!" which covered a host of computers (Apples, Ataris, Commodores...) and one of the best computers of the era was the Commodore 64, and so one spin-off of COMPUTE! was a magazine called "COMPUTE!'s Gazette" (besides suffering from an awkward embedded exclamation point, the name made more sense when Commodore's computer was the PET, and I think the "PET Gazette" may have predated COMPUTE!)

Typing in those programs was a pain in the butt (not to mention the danger of a critical typo in the listing) and so Gazette offered a disk-based companion to the magazine, with all the software pre-loaded and ready to run. My Uncle Bill subscribed for a while, and I was fortunate enough to inherit a load of magazines and disks when he moved into IBM-PC clones.

The tireless folks at archive.org made an archive of both the disks and magazines available to the general public, and I thought the games deserved a closer look, so I went through each issue, month-by-month, and rated each game from 1 to 5 stars. It was fascinating watching the rise and fall of the Commodore 64 (and some related machines) as a cultural force, and getting a glimpse of what home computer culture was like.

I want to talk about the "5-star" games below, but also I made a corresponding website with disk custom, grab-and-go images of all the 4- and 5-star wonders. (Here's a page I made on running these things on your own computer)

I tried not to be too stingy with stars, but 318 is a lot of games, and many really rather crap. But here are the ones that really knocked my socks off... again you can download disk images for all of these on the 4- and 5- Star Website, they deserve to be played! 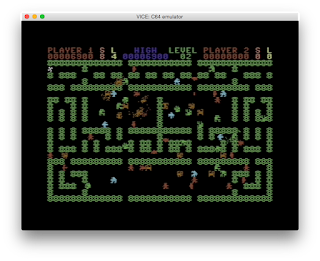 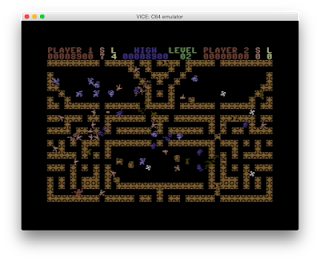 Steve Harter's games literally inspired this blog. I interviewed the author in 2006. Dozens and dozens of colorful pixel monsters on screen, a well-tuned running around shooting mechanic (alone or with a buddy), the strategy of playing the monster types against each other so that the sped-up level endgame wasn't completely unmanageable, little tricks like using the screenwrap around to setup a bullet trap that would keep on going until it hit a monster (or your own back as you tried to set it up) - just great. Robotron meets Wizard of Wor with a hint of 2D Doom. 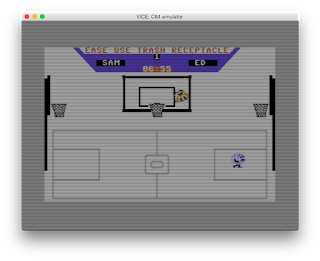 Unlike most of the other games here, Rhett Anderson and David Hensley Jr's work did make it to the big time, under the name "Bouncers", for the Sega CD. Playing as the ball is a really neat little conceit, the physics are pretty decent, and having a computer opponent to play against is a great touch 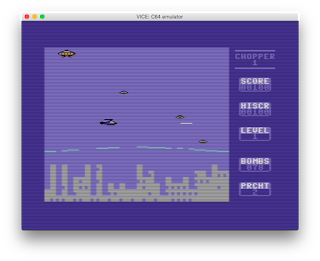 Mike Sedore's unpretentious little game is a near perfect exemplar of the genre. It follows advice reiterated in Chapter 6 of Chris Crawfords The Art of Computer Game Design, about indirection - you have to save your own vehicle's skin, but mostly you're defending the city from the bombs being dropped. On my first review, I thought little details like the fiery explosions blocking continuous shots prevented spamming and generally represented superior polish. 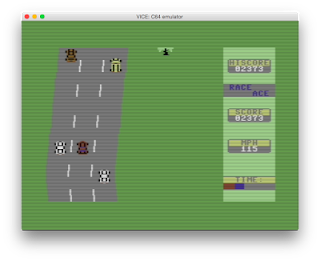 I'm not 100% sure I realized Mike Sedore made 2 of the 6 "5-Star" games before this. The feel of this game is superb - the way you have to snake around various lanes is weirdly realistic, and the night tunnel mode and slippery ice both add to the fun. The only drawback is how AI cars can pass right over each other. 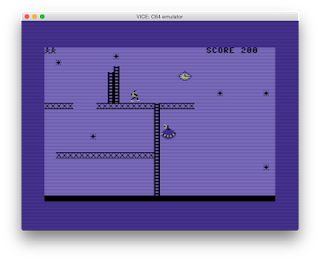 Brian Casey's game rounds out the top six. It's for people who really like a challenge, but it rewards thoughtful play. Definitely a hint of Jumpman, and I love the way the robot is incredibly dangerous, but you can think your way around it, since it only changes its patrol at fixed intervals, and is stuck on diagonals.

So, that about wraps it up. I hope someone - gamer, archivist, or both - finds the archive useful or entertaining. It was a lovely time in gaming history.