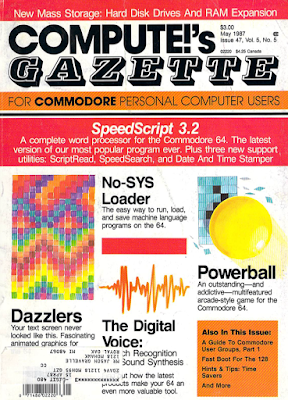 Favorite start to a letter to the editor:


I don't seem to understand what download means. When you download a program, is it from your disk drive or from the other person's drive? I don't understand uploading either.

It would be a totally reasonable question, but somehow that final sentence just moves into a new realm of "Grampa Simpson".

Some tech review stuff of voice synthesis and even recognition. It doesn't mention "SAM" (and I have some neurons reminding me that that stands for "Software Automatic Mouth") which was a nifty pure-software toy to do voice synth.

They have some "Dazzlers" along with a construction kit, a colorful charactermode screen-savery thing, a bit hipnotic. The other emphasis is on their recurring word processor "Speedscript". So tough to remember a world before WYSIWYG.

Good lord, this nothing this "game" does that a set of scrabble tiles and a timer glass couldn't do. Players take turns entering five words that get mixed up and the other person has to figure them out. Rating:1/5
A solid -- if frustrating and graphically minimalist -- version of Arkanoid (aka "Breakout with powerups and random dudes floating around" -- the article references Breakout but not Arkanoid.) You control the bat to bounce the ball back up to clear out the bricks. Little flickery dudes float around to try and confound you. There are normal bricks, tough bricks, and white invulnerable bricks. Powerups are 'S'low, 'C'atch, 'L'onger Paddle, 'F'iring Laser Beam, 'P'owerball (blasts through everything), '3'-balls, 'N'ext Stage, and * for an extra life. There are 10 levels, but even #2 and 3 get pretty tough. Rating:4/5.