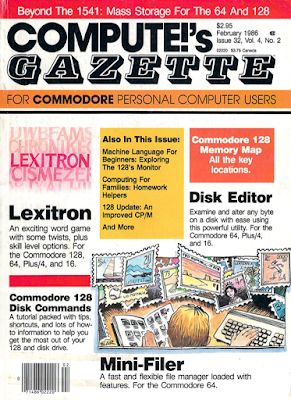 Ho-hum, kind of a dull month. The Editor Notes the emergence of the 128 as a surprise hit, and possibly keeping Commodore in the black, with the Amiga not quite going as gangbusters.

An article on storage options. Stringy Floppies, heh. Also, what later became established as a '3.5" disk' is called a "microfloppy". (The article says the 1541 pulled about 512 bytes a second, yeesh)

The "Horizons" column has a C=64 version of the famous Amiga "Boing" Demo: 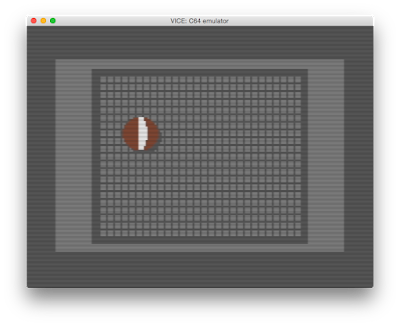 Not that great really, though the sound is nice. (I've seen better... even the Atari 2600 had one)

For what it's worth I'm switching to a number system rather than stars, I may go back and adjust previous ratings.)
A cute little rendition of Foozball, but only 2 player. (Wonder how hard a computer opponent would have been?) I haven't tried it as a proper 2 player game, but the control seems pretty good-- left or right moves your middle row, and the diagonals control the upper and lower rows, and fire kicks. Rating:3/5
A polished rendition of a so-so game... a basic word hunt.  The UI could use a little work, pressing the button for each letter is a bit tedious, and it's odd how the musical notes that you get aren't quite a scale. The timer is kind of neat, a visual thing on either side that falls down as time marches on but you can push back up with successful finds. Rating:3/5