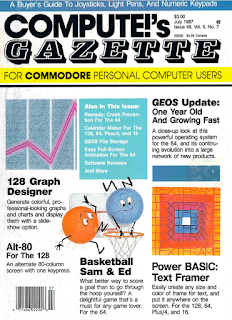 Editor's Notes compares new smart electronics in cars (like the ABS) to Ripley's exoskeleton lifter rig from the end of Aliens.

There was an article on input devices, including my personal favorite joystick, released in the USA as the "Epyx 500XJ"...
Reader's Letter of the Month:


Every now and then I have problems with prank phone calls. I own a Commodore 1600 modem. Can I trace a call with the modem? If so, how? If not, why?

I was interested (but not enough to load up, since the menu encourages saving to a different disk)  "Easy Full-Screen Animation" which let you make 3D rotating wireframes on the humble C=64.

Now this game is a hoot, and one of my fond memories of my previous collection of Gazettes. It's 1-on-1 basketball... but each player is a basketball. The trouble is neither has a strong enough jump to make it to one of the three baskets, and so has to finagle bouncing off the other player to get enough vertical movement. It's pretty fun, despite (or because) of the frustration of not controlling your movement once you're airborne. I'm also really impressed that there's a moderately decent AI opponent to make up a one player mode.

Oddly, this game was gussied up and ported to the Sega CD system, under the name Bouncers (Youtube reviewed here in Italian, but it was the best footage I could find.) Rhett Anderson has been active online, including his stackoverflow bio page which says "A game Sega published was based on a dream I had."

At 4-ten "minute" quarters (though with the clock running faster than real time) a game goes a little long. There was a utility program "Basketball Sam & Ed Customizer" that let you tweak that. (along with the ball colors (useful for the case of b+w TVs) and the somewhat messages that scroll by over the billboard (which I guess are meant to be funny, but not really))

Haven't tried this two player lately, but am impressed enough by the originality, the gameplay, and the one player mode to happily say Rating:5/5 (Download Basketball Sam & Ed)
A slightly tweaked "Surround" variant, though feature wrapping screens, and the ability to turn off the deadly trail your bug is having coming out of its butt. Annoying beep-beep-beep soundtrack, but this deserves a closer look with two players. Tentative Rating:3/5