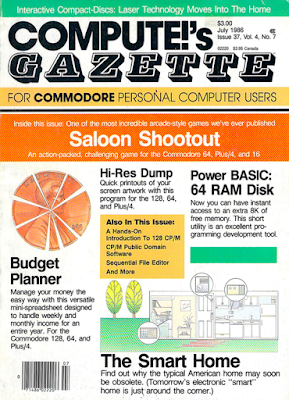 Editor Notes a kind of resurgence of the C=64... in spite of, or maybe partially because of, the awareness of the higher end machines coming out. (and with the Amiga possibly losing out because of price to the Atari ST.) They mentioned hardware PC emulators, stuff you'd jam into ports on your cheaper home computer to run the IBM stuff... interesting idea, and makes me wonder what the price of the crappy PC technology might have been to justify that.

History Recap: home computers from the C=64 to the Amiga were doing AMAZING things relative to the IBM, playing much better games, in part because they relied on some custom chipsets geared at graphics and sound, while the PC space put everything into the horsepower of the core chip. (Eventually PCs started getting custom sound cards and EGA and VGA cards, but they were playing catch up for a long while.)

An article on "Smart Homes"... guess that's been a buzzword for a LONG time. I wonder if there's anyone who still has a C=64 at home wired in turning their lights on and off...

Heh, and it looks like the "go to" topics for slow months has switched from printers to CD-ROMs, though still in terms of it being "this is the future"... I don't think they really became "standard" until the early to mid 1990s.
This game has so many cute touches but isn't well balanced. (Or maybe I'm not judging fairly? Do they crank up the difficulty as a form of replayability? Unfortunately I'm rarely interested in challenge for its own sake. And of course I'm trying to plow through these things at a very brisk pace.) ANYWAY. You control the pistol at the bottom, but oddly up and down are inverted. (A detail I like in an FPS but doesn't quite work here.) The cursor for aiming height is way to the right of the screen, probably a deliberate difficulty booster. You try and shoot the beer glasses coming in tfrom the left before they fall down in the center, but you have limited ammo and time. Making things worse, a bandit will show up in a window and steal ten bullets, and he's in and out really quickly. (Plus sometimes it's just a happy face dude, shooting him docks points). Shoot ten glasses and a mouse appears that you can get to run back and forth, and also you can recharge bullets by hitting 10, J, Q, K, A on the cards flashing above the piano. Speaking of piano, that's probably the cutest part of the game. The keys really flash with the music, the paper roll scrolls in the middle, and shooting the keyboard changes songs. Rating: 3/5
More of a puzzle than a game, type in which column the queen goes in for each row, so none of the queens are in the same row column or diagonal. Cute touch that you can type "c" and have the computer try to solve it from here instead. (PROTIP: Use VICE's warp mode...) I admit I am slightly impressed I can't google up the answer to this, but maybe it's known by a different term? Rating: 2/5

"Outstanding graphics" says the teaser summary... I think I would go with "more or less competent graphics" (especially compared to the super pretty planetoids in Space Arena.) The Meteors drift around a bit like Asteroids, but simply explode when hit, no matter their size. There's no sense of inertia or turning, just press the direction you want to go. On the other hand, the number of objects make it a relatively ok game. The manual mentions you get a special award/extra ship for reaching level 9; maybe if they put that extra reward promise into the display on the right there would be more incentive. Rating:3/5