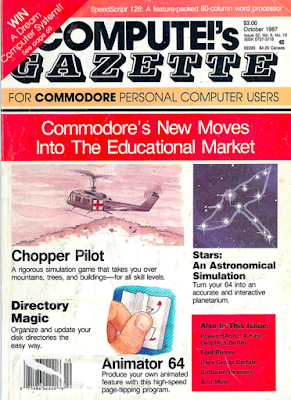 Editor Notes the way technology is getting cheaper and better, as seen in purchasing power for home computers. If only they could see us now...

There's an article for programming for GEOS, which is an interesting change of pace.
Press the firebutton to get your copter's rotors moving (and ultimately control speed), press up to descend and down to ascend (which makes sense for planes, not sure if its really how helicopters work). You soar over a simplified landscape, knocking flags over with your landing struts for points and trying to avoid crashing into other things (you get 25 "errors" before the game is over.)  Not a lot to say about this game... a little too simple, maybe. Rating:3/5
A two-player only game of... squash, I think. Plays rather Pong-like, though the return angles seem rather limited. The magazine article tries to explicate/generate the strategic depth... it's kind of interesting that the ball changes color based on who has to hit it next, but of course a player is free to hit it twice or more in a row. Tentative Rating:3/5