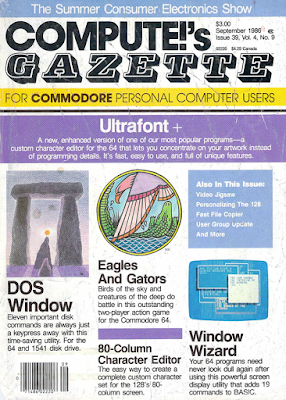 Editor Notes is more bellyaching about the ST vs the Amiga, claiming the former had 10x the installed base! That's amazing if true... it doesn't quite meet my recollection, though my data sample is tiny (I had one friend with an Amiga back in the day, which probably influenced my view, and then decades later saw an ST "in the wild" on a musicians' desk... the ST really owned that market for a while and I wonder how much of the "10x" figure is made up of that.) The article blames the Amiga being positioned as a business machine and then not competing on price.
Just about the simplest possible bidding game - cards from one suit (clubs) are dealt, and each player bids from their suit, higher card takes the trick. (Human is hearts, Computer is spades).  Huh! I remember getting weirdly into this same game in a different form... for some reason my college freshman roommate decided to run a programming competition and build programs that played this game and sent them against each other. I think we both punted though, disregarding what the opponent was doing, and just using statically assigned values... not very impressive! Anyway, twenty years later I started thinking about the problem, and how my roomie and I "solved" it, and wrote a program to generate all the static algorithms (for a simplified 5-card case) and display the results. It makes a nice quilt-like fractal-y thing. Anyway, not much of a game. Rating:2/5
This game took a few plays to grown on me, though the A/V is kind of brilliant in an iconic and sci-fi way.  You have to make your way from the bottom to the top... the hex cells in front of you shift randomly every few seconds, but luckily your guy moves really fast. If the cell you're standing on disappears you get pushed down a bit, and if you just try and hold the stick straight up and hope you get reset to the bottom as well.  The game makes an awesome deep, echo-y thud if you do get pushed down. Instructions say the goal is to beat 40 levels (the timer resets to 30 seconds each level.)

A word on ratings: 3 is kind of a default, and 4 is particularly worth trying out... this one probably falls between that, but given that I plan to collect all the 4s and make them playable with direct images, I'm gonna err on the side of being generous, especially given the A/V of this... Rating:4/5
Slightly amused they felt the need to clarify "Assistant Editor" for the author. (I have been assuming the Mykytyn/Tuttle combo were somehow on staff as well, but haven't dug into researching that.) Anyway, like his earlier games Whirlybird and Props, this game has special attention to the art. (Actually, that badge they made for the cover is pretty terrific too!) The animation of the Gators in particular is super appealing, as you can see on the title screen: 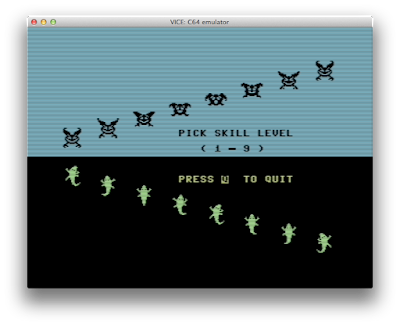 This is a 2-player only game, one player eagles (well, kind of) and the other gators (albeit a bit more iguana-like) Players move their joysticks (there's a keyboard option as well) to focus on one of their army, and if they hit fire JUST as the beast hits the border, it clamps on and begins pushing the boundary - but the other player can reclaim the position using the same method. They stop you from spamming the button by making your beast back up it's not at the border itself.

I'm putting this on my list to playtest with a buddy, but it seems like a nice concept. The difficulty of having press the button at just the right time, along with the mental focus to make sure you're looking at the best available beast, seems to do a nice job fleshing out a very symmetrical game. Tentative Rating:4/5