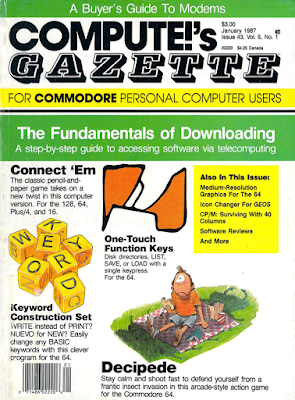 A new year! I know from memory that this year ends on an extremely high note, so I'm hopeful for the rest.

Editor Notes the Winter CES. It seems like year after year these two shows (it used to be twice annually) provide a bulk of fodder to go on about in this column, and for a number of the feature articles. And I guess it is an exclusive, insider peek, but still. Maybe I'm jaded because I'm going through the years relatively quickly, so the patterns of repetition (for printers, modems, online services (This month: The Fundamentals of Downloading") etc) is all too obvious.

They've started to include some utilities for GEOS... I wonder if any GEOS-only games will show up.
A cute port of Centipede ('Decipede' is an arcade-style action game' starts on the article's paragraphs, putting it mildly.) It's a nice exercise in the use of the C=64's basic graphics set... the centi-- err, decipede is made of filled in circles, the player is the spade character from cards, the spider is a large X crosspiece, mushrooms are club characters (diamonds when poisoned), the scorpion is an asterisk and the mushroom-adding flea is pi. The action is very fast, especially the movement of the player, but something is definitely lost. Plus a quibble, the board reset marking the player's death vs. finishing off the centipede is weirdly similar, with the player reappearing in the middle of the board, so you have to wait a second to know "did I get the centipede? or did she get me?" Rating:3/5

Bonus Screenshot: I'm half tempted to go back and make extra screenshots of games that had a nice title screen... 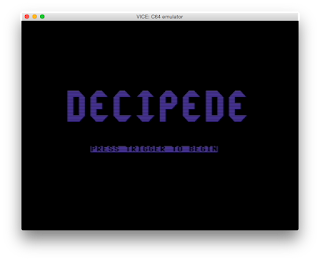 I feel like I spent many content hours making very similar title screens for games that never came to be... it got me noticing a certain kind of typography.

Unlike June 1986's "Squares" this game is "just" the pen-and-paper game put on screen. Charmingly, to set a computer player you enter its name as "C-64". (You can actually set the computer to play itself this way, which is a nice touch (though you might want to use VICE's "warp" feature to see a game unfold.) The pace is slow, the interface just adequate. Rating:2/5