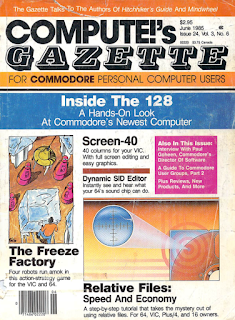 The Editor talks about the failure of Japan's MSX system to make it in the US market, and thinks the low price of the VIC-20 could be to thank/blame. Seems like a lot of neat sounding, many manufacturers, one standard computer products fail here... thinking of the 3DO, for starters.

Anyway, this issue clearly has more fun talking about the new 128. I especially liked that its included BASIC let you access the some of the graphics and sound without so much poking.

Also having a 40 column VIC-20 is kind of cool, conceptually, but I couldn't get it to work.
The theme and less fun parts of "Pengo", with a notable amount of Artificial Stupidity. Those are blocks of ice that "slide" if you press against one, and temporarily stun one of the 3 or 4 robots that are after you if it hits. The goal is just to survive I guess... but that's not too hard once the robots start getting locked into some feeble minded pattern with you standing safely to one side (I would put it on Warp mode in the emulator and watch time run down). Rating:2/5


This feels a bit like a squared off version of Electronic Arts' "Worms?" (which is on a hex grid) but you capture territory by completing a square (like the pen and paper game Dots) rather than just making lines. Every time your snake encounters a novel situation in terms of filled in lines around it, it asks you what direction it should go. Like "Worms?" I find it a bit ambiguous- like are the situations judge relative to the motion of the worm or in absolute directions (I think the latter), does trail you've left read as any different from trail an enemy made (I don't think so...) In which case I think there are 16 different "situations", so... 64 different possible worms? Huh. (I think a nice UI that showed you what the snake's previous training was would help.) Anyways, I'm rating this a little higher than I would because it's a very cool idea and nicely lets you play up to 3 computer players. Rating:4/5