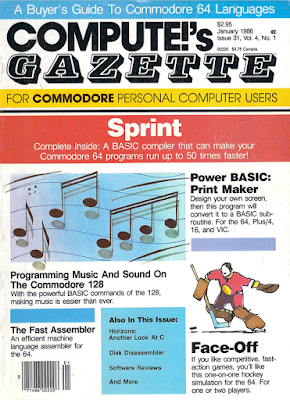 Editor's Notes were the same as in COMPUTE!, and they are marking the death of the magazines Creative Computing and Popular Computing. (I wonder how Family Computing is doing at that time, I remember that one having a bigger presence in my life then.)

The issue contains both a compiler for C=64 BASIC and an article on other languages available for the machine, and I think about how in some ways Interpreted BASIC was an odd choice for a generation of computers that were already slow as heck. On the other hand... even these days I prefer programming environments that are run-and-gun and even a quick Edit/Compile/Run loop feels like a drag compared to Edit/Save/Reload, so maybe there's something similar here. I mean, the way that even starting a commercial game had a quick stop at the gateway of BASIC, a language most kids picked up a tad in school, was amazing, so maybe it wasn't such a bad choice.

Slight change in the menu program: now they use regular number keys rather than the function keys, which definitely improves things a bit, especially on emulators.
Oh, nifty game! "This engaging two-player game, which could have been titled 'Indirect Aggression' for its unique design, features superior graphics and playability" I love the detail of the moons- each one individually beautifully cratered, and then tiny character Galaxies in the background. The concept is fantastic too... two asteroids ships (i.e. left, right, thrust w/ intertia) fly in a small arena with bouncy walls. The only danger is hitting a moon. Each player has a slow firing "photon gun" that will start a moon moving a little, or the other player a lot. (Moons cant bump into Moons, though, nor can the players collide.) Anyway, a brilliant, innovative game, even if not quite perfectly tuned, and only 2-player. (Would be great as the basis of a Mario Party minigame) Rating:4/5
Another promising head-to-head game from the Mykytyn/Tuttle pairing, but unfortunately my copy doesn't work. The game looks to be a variation of Air Hockey. Simple graphics made up for by the inclusion of an optional computer opponent. Rating:???