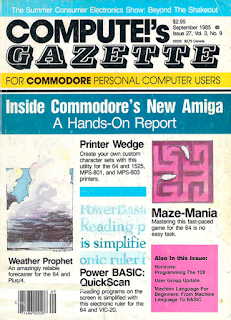 Exactly 30 years ago from the writing of this blog!  Editorial notes were kind of rebounding from last month's dour outlook... maybe the Amiga and ST will be the future! It mentioned that originally the parent COMPUTE! magazine was first called "The 6502 Resource Magazine", because that was the chip the computers it had in common all shared. The next generation was going to be similarly 68000-centric. (The Macintosh gets mentions here and there, but not in this editorial.) Also stuff like CD-ROM, putting an entire encyclopedia on a disk, was kind of blowing their minds... it's easy to forget how limited storage was back then.

Also, the magazine seems to have had a layout/design refresh.  Also, it has been a few issues since there's been anything for the VIC, and even that was a simple text game. (Ironically this issue includes a "VIC Emulator" for your C=64...) Oops, I stand corrected: Friendly Alien has a VIC-20 port. (Pretend I'm live-blogging here) Still, time is moving on, I guess 5 years was a pretty good run for the VIC.

On the other hand... "Weather Prophet"... it's kind of hard to imagine anyone seriously entering this much data day after day: 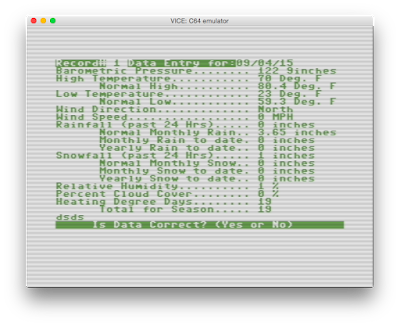 Game by committee, and with a kind of misleading name and cover art... but pretty good! Each vertical or horizontal passage is patrolled by an emeny moving in a simple back and forth pattern, and it's kind of pleasant to duck you way into each passageway. The timer makes things really tight, and insists you be a bit daring. Variations include "Fade" where the enemies aren't always visibile and "Nervous" that jiggles the whole screen. (The two player version is pretty worthless, just one person playing beating a level or losing all their lives) Rating:4/5
"Written by a Child Psychologist". It's a neat idea, if not intuitive... your "tracker" is kind of cursor that puts down the cross shaped track sections, and once your tracker is "home" (confusingly lower right corner, I might have called it "goal") Purple Herbie, the face thing, will follow track you put down. You get bonuses for crossing the coins and bills. The Xs are "Meanies" that leave more deadly Xs behind them. Rating:3/5
The "Friendly Alien" in question is clearly E.T. - on the one hand, 3 years after the movie's release, on the other, it avoids the pits of the infamous Atari 2600 game. I was going to rate this a bit lower, being another "full screen collect-and-avoid-baddies" but it's a little better than that. Blue and Yellow Asterisks are "flu viruses" that end the game. You collect all the dot candies, the red blocks are soda that make the control a bit wobbly but it's not as much of a factor as it looks. All candies collected resets your position and you have to travel to the top left and touch the Speak and Spell/Umbrella combo, you are then reset again and have to make it to the mother ship, after an interesting-ish little animation of its arrival. The timer is still ticking through all of that (points off for the incessant beeping soundtrack) so you really do have to hustle. Rating:3/5

UPDATE: I just realized this is the same guy who made kind of the same game a year ago. Heh.