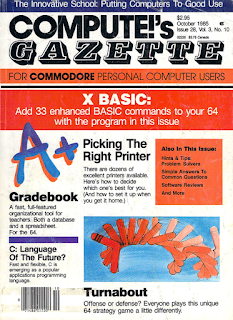 Editor Notes speculate about the Commodore 64 now that the next generation is arriving, but sounds a kind of reassuring note, which I guess history ends up bearing out. (This was my main computer well into 1991, when I finally got a PC so I could get ready for College play "Wing Commander"... actually the Amiga always kind of feels like the "computer of the future" to me, in part because it did what it did so well, but also because I never had one.)

And yeesh, another article on buying printers? Kind of reminds me of this Onion article from soon after Steve Jobs' death...

Sorry. Life's too short for me to play some down-home version of "Lemonade Stand" even for a blog I like. (Quote from the accompanying article "Those who playtested thi simulation during its development commented that this game is too much like real life--it's hard to make any money") Rating:2/5, one of them out of guilt.
This is more like it! An innovative yet difficult game. The player is a humanoid in a playspace hunted by these whirling boomarang like "whirligigs", deadly to the touch. Your only advantage is you can swing the doors that make up the playfield... pressing against one side will cause it to snap-rotate 90 degrees around the opposite axis. With careful planning, you can trap a whirligig in a 1x1 box, causing it to disappear. The AI of the enemies is really good though... they don't pursue you in a simple homing path, but will bounce around when stuck and try an alternate way. And as if that's not all tough enough, if the Bonus timer runs out the level speeds up. Rating:4/5

(Chris Federico of The Classic-Gaming Bookcast pointed out to me this game's flipping doors may have been inspired by Synapse's Drelbs... still a good game, though, and the AI is very evocative.)

Another somewhat think-y work. You specify where you want to fire a beam into a grid (via < and > (, and . on my keyboard) and pressing return, and it shows you where the beam exited. The trick is the grid is full of little reflecting quarks, and so you have to deduce what angle quarks are where. This screen shot is the ending screen after I quit (frustrated because I thought the right turn my B and C atoms did mean there was a reflector (marked via the little checks pattern) but actually it was 3 reflectors cunningly arranged. Rating:2/5