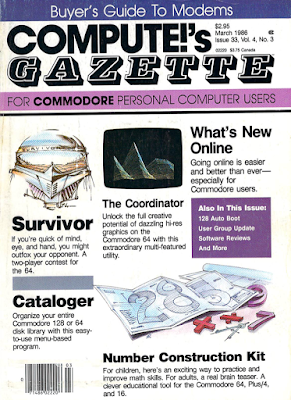 Editor Notes a regretful Commodore factory closing, Tramiel's Atari ST picking up speed note, and then without a lot to say previews features on disk... 2 players each, ah well!

The article on going online is kind of interesting to see in the context of the Internet.

I do like the concept of a "Number Construction Kit".
I'm going through a little crisis here, in terms of doing this kind of blogging is generally a solitary pursuit, but then come some two player games that I'm not sure if I can fairly judge on my own. (Heh, it recapitulates some of the more melancholy aspects of my own "only child" upbringing.) I guess I'll try to gather up all the two player games and go through them with a gaming buddy en masse but I haven't had the chance to do so yet. Ah well! (Secondary bummer: I got a USB gadget that's supposed to let me use my old Atari 2600 joysticks in my emulator, but I can't get it to work quite, so I'm stuck with inadequate game pads.)

Anyway, this game is a simple "shoot at each other in a grid arena game", but has a nice speed and throws in a few complicating elements (AI enemies are a big threat and keep everything moving, especially since each player only has ten bullets to start), and makes good use of character graphics. I like this cheat sheet the article provides about the items in the game: 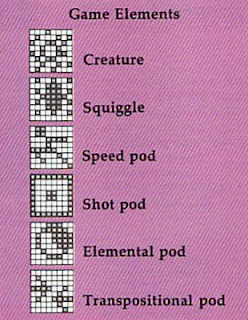 Squiggles are the AI enemies, and the Pods are powerups: respectively go faster, get bullets, release a bulletproof but shortlived "Creature" that will hunt your opponent, and swap places.

Seems like a good game, I will report more when I play it for reals. Tentative Rating:4/5.
Whoa- these guys (the go-to guys for this era of the magazine) were busy this month! Another 2-player only game. I have mixed feelings about those, since they can be more social and fun than solitary gaming, but you have to have an opponent on hand, and it's kind of an "easy" form of game design... certainly easier than making an AI opponent, and in general the conflict writes itself.

Anyway, in this game one player controls the yellow bar that can shift a row of the playfield horizontally, and the other player controls the red bar that shifts a column vertically. Each player wants the slowly moving ball to rebound onto one of the walls in the same orientation as their opponent (i.e. the yellow player wants to get the ball to hit the vertical wall, which is the same orientation as the red opponent.) Also, you can't adjust pieces when the balls in that row or column.