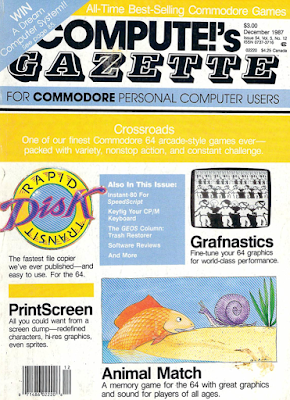 This issue, appropriately enough, has a feature about the best selling games on the Commodore--but more importantly, it features what I suspect will end up being the best game published in this magazine... and in the running for best on the system, period.

(To celebrate this terrific game, I think I'll switch gears and provide links to direct disk images of all games I rated as 4 stars and up, though I'm going to have to go back to the previous picks)
What a brilliant game this is! (If it wasn't for this game, this blog might not exist, my childhood interest in Gazette games a mere barely-remembered hobby.) This game is 28 years old, and 14 years ago I reviewed this game for the now sadly defunct classicgaming.com (though the Internet Wayback Machine still has a copy) At the time I made this GIF of the player and the enemies:

Though to be fair, I like the more artistic version that came in the magazine itself: 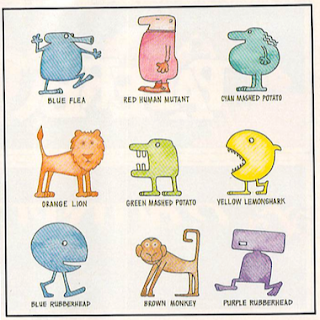 The monster names were picked by the magazine's staff... and I know, because I interviewed the author via e-mail in 2006. (I got his contact info from indie game maker Anna Anthropy who made her own tribute page to this game.)

Anyway, onto the game... it's one of the few that stands up terrifically well as both a one player game and as a head to head game (like in Joust, you have the options to cooperate or compete.) Combining the creepy dungeons of Wizard of Wor with the fearsome crowds of Robotron, you play a gunner, roaming the halls... along with dozens of enemies, ranging from the nearly harmless Blue Fleas to the fellow shooting Red Human Mutants, the ravenous (and vaguely Pac-Man-ish) Yellow Lemonsharks to the perplexing Rubberheads.

A great feature of the game that, unlike many others of its ilk, is that the many of the monster types hate each other as well! It gives you a terrific feeling of being one monster among many, rather than the special character for whom the game world was created. Later, DOOM had a similar concept where you could get enemies enraged at each other, and here it suggests one of the primary strategies: when the level starts you can watch as the monsters zoom in, one wave type at a time, and that should inform your tactics... if one monster type is over-represented, you might want to focus on killing members of the breed and letting more of its enemies survive, so that the sparsely populated end game (that has the monsters tremendously sped-up, ala Space Invaders) isn't a death trap.

I've seen so few games of this era with such attention to detail...in general the more monsters there are the faster they go, but the player's speed is never affected. The game uses character graphics (allowing for a truly terrific number of enemies at once) but movement is handled in half-character steps, avoiding the coarse-grained movement that curses most character-based games. However explosions (and monster warp-in) are handled with beautiful sprites, splaying out over the neighboring characters, and again transcending the usual boundaries of this type of graphical system. There's emergent gameplay: a player might accidentally shoot themselves in the back, only to realize they can use the Pac-Man like wraparound corridors to lay traps of bullets that travel forever until they hit an unsuspecting beast. When a player starts the level or comes back after dying, a "cleansing bullet" flies out of the origin spot, thus preventing cheap deaths. Even the attract mode is lovely: besides the scrolling text with point values of the beasts, you can use the number keys to send in various gladiators and observe how they interact with the other monster types.

What more can I say? Rating: 5/5 (Download Crossroads)
Overshadowed but still decent, a 1 or 2 player game that adds to the typical "Surround" formula by the addition of little tasty mice that move around on their own accord (unlike the apples in Nokia Snake). As you eat them little mousies you grow a bit, increasing the challenge, plus there's a timer. Need to see how the two player stacks up... Tentative Rating:4/5 (Download Snake Pit)
A very pretty but lacking puzzle game.... though you can play against a human, the computer, or even watch the computer play itself.  Players take turns selecting one of their trees to grow its roots. The rules for which tree can grow are oddly arcane... you can't grow into a taken spot, but there's some rule where you can't move to a lower level until all your trees have made all their legal moves on the current level?  So you spend away too much time listening to the unskippable sound blurbs proclaiming illegal moves, or no move available. Rating:2/5
A straightforward "Concentration"-style pair matching game, but with lovely sprite graphics and a great interface, mapping the keyboard to the laid out cards. The game has two modes (confusingly called "Keys Only" and the second "Keys and Shapes") - the first is the simple matching game, in the second you can only match the animal currently on large display on the top right. (In the first mode, the animal still displays there but I don't think it affects the game play.) It also has an interesting title screen, cycling colors on the main keyboard display and with an odd techie-sound playing on loop. While stuck under "Education" instead of "Game", I could totally see this being a big hit to play with a kid. Rating:5/5 (Download Animal Match)