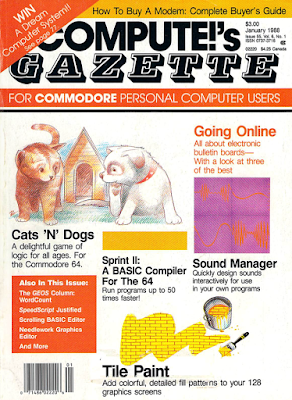 Editor Notes about Commodore doubling down on education, and also mentions how Nintendo and Sega are bringing interest back to video game machines.

This issue features a "Needlework Editor". 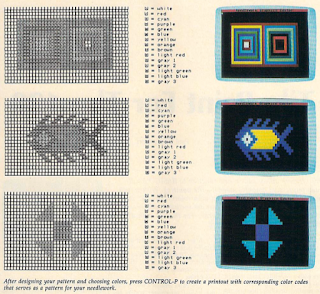 Oddly enough, my dad was national-competition level at counter-cross-stitch and needlepoint. Sometimes I think about the connection between his stuff and pixel art. More on him later, I guess. (There's also a "Tile Paint for The 128" which brings that computer into something like the world of mosaics...)

And look, a guide to buying modems. Man, it must have been kind of tedious to write that stuff year after year. (It would be interesting to do some text analysis and see if they ever cribbed from themselves.)

It's Spacewar! I only put the exclamation point in for tradition's sake; this game itself doesn't seem that exciting, at least compared to exactly-two-years-ago's "Space Arena". For better or worse this port (with gravity/no gravity etc variants) seems pretty fast paced. I have to try it with a buddy at some point. Tentative Rating:3/5
Cute enough graphics in this pets themed port of "Connect 4", but suspiciously bad sound and control. You can play against the computer, and there's an optional element of chance, a "Dogcatcher" who will block one random column per turn. Rating:2/5