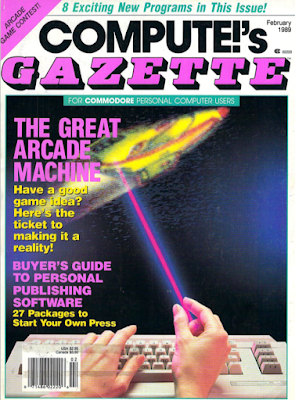 Editor's Notes mentions a new magazine, "COMPUTE!'s Amiga Resource". I was kind of wondering about the lack of direct coverage of the things.

A big deal here is the game construction kit "The Great Arcade Machine" and an accompanying contest.

This thing seems to be an early example of live coding... it boots up with a game running in the background, but you're back at the BASIC prompt. This is a library of ML routines and 31 new BASIC commands. It's a pretty cool idea, but kind of overwhelming to be honest! I'm looking forward to seeing what games came out of this.
Not quite as weaksauce a Battlezone clone as Supertank but still not good. You control the tank at the bottom of the screen. In practice pressing up and down raises a(n invisible) reticule, and you shoot enemies as they trundle towards you. There's not much of a sense of rotation - actually I think they may have got it backwards, with further away enemies rotating across screen faster - so this plays like a glorified invaders game. Rating: 2/5 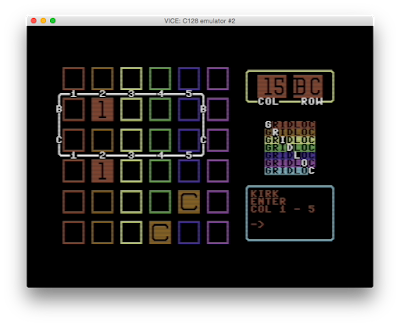 Humdrum 128 strategy game, 1-5 players, any of which can be computer controlled. The goal is to get a piece on every row and column before your opponents. For each turn some virtual dice are rolled that define a boundary in which you can place your piece, and you can put pieces over your opponents'. Rating 2/5