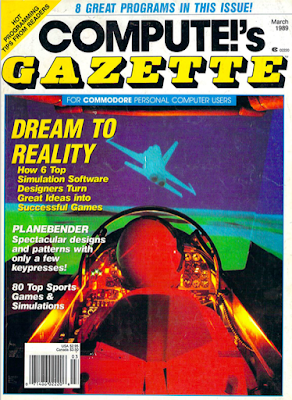 More layout changes, most notably the table of contents.

Focus on simulations. Man, it must have been really frustrating jonesing for realistic simulations on the computers of the era...

Add snippet of the moment: 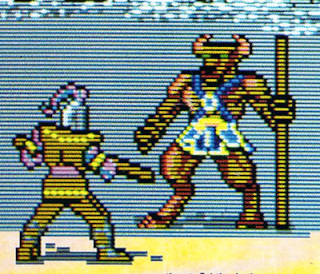 Anyway, onto the games!
A two player only fishing game... I wonder if it would have killed them to throw in a computer opponent. Anyway, the game select screen is a little wonky in terms of you use the function keys to set what obstacle is going on in each "row" of water separately... nothing (the default), seaweed (which you have to drag in), or a speedboat (which pulls you into the water). First to eight wins. Rating:3/5

"It is the year 2008 and scientists have discovered a potent bacteria that cures practically all known diseases." It's a cooling looking game board, and the gameplay is kind of like someone tried to port Tempest to C-128 BASIC. You move around the outer edge of the petri dish (or whatever it is), so that your gun is always angled to the center. You plunk off the relatively innocuous bacteria in the center, and avoid the mutant (and indestructible) one that joins you at the edge. Rating:2/5