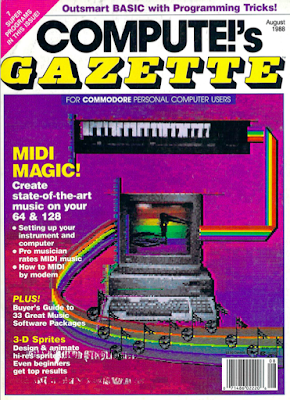 Features on MIDI and Voice Synthesis. A complaining letter to the editor mentioned the large volume of mail they'd get. It's tough to get a scale of importance of this kind of magazine, relative to, say, pure online plays. I mean, the distribution to so many news stands is kind of amazing to think about. (And as always, I'm grateful to my uncle that he liked the scene enough to get the magazine on disk, and then later passed on a large collection to me.)

Game review quote of the month, on Zig-Zag: "The Matrix of Zog will remind you of a cross between Versailles and a 1930s bijou." (That same review had an earlier Hitler reference, suggesting maybe videogames might have placated Hitler after his art school failure.)

Later in the issue I liked this lead in to a piece on Computer Speech:

It's easy on Star Trek. "Computer," Captain Kirk might say, "cross reference the Klingon flight pattern with the dance of the Earth worker bee."

"Estimate the next time that the Klingons will pass in front of us."


That's an evocative and imaginative example!  (Up until this post, this OCR'd transcription was the only place "dance of the Earth worker bee" appeared on Google- I didn't realize that someone was OCRing these, though I'm still not sure if it would help with the type-in only games of the early issues.) It also reminds me how Star Trek: The Next Generation had started just the year before.
This 2-player only game plays like a digital version of the tabletop game Crossfire. Each player controls a stationary but rotating cannon that launches a potentially endless stream of tiny pixel BBs. It also had a board editor and a bunch of settings to fiddle with. Really need to try this one with a buddy, for now the technical aspect is impressive enough, and the concept solid enough (I tried the same idea with Java physics way back when) that I'm saying Tentative Rating 4/5 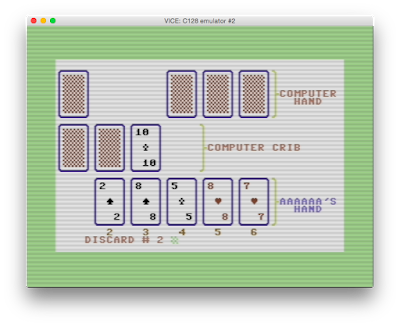 A C-128 card game. I can't fairly judge this as it's so not my cuppa, but the fact that you have a computer opponent and that the scoring of the game could otherwise be very fiddly makes me suspect that people who like this sort of thing with find this the sort of thing that they like. Rating:3/5
A stock market simulator for 1 or 2 players. The interface is oddly clunky, in terms of you have to type the full name of the player wanting to make a trade once you press space to stop the real time board updates, and then you have to type the full name of the category you want to buy or sell. The fun seemed pretty limited (though more entertaining via VICE's Warp Mode) but I liked the article's Bulls v Bears illustration: 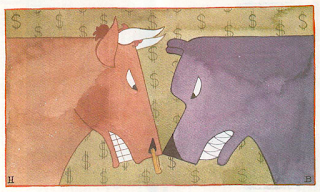