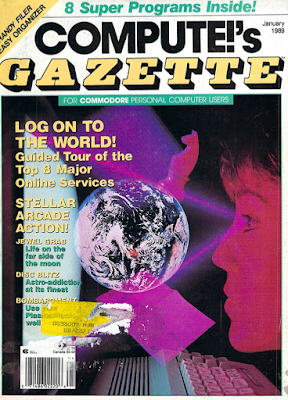 Editor's Notes is how 64/128 is still robust but obviously slipping, but maybe Commodore's idea that Amiga is the answer for home AND business AND school is spreading things a bit too thin.

One of the letters asks about the copyright implications of using "3-D Sprites" from August 1988. The answer is ok for personal use, but for "personal or financial gain" is out of bounds for copyright law. Seems like a kind of weird place for the magazine to be.

Good start to the year, game-wise! 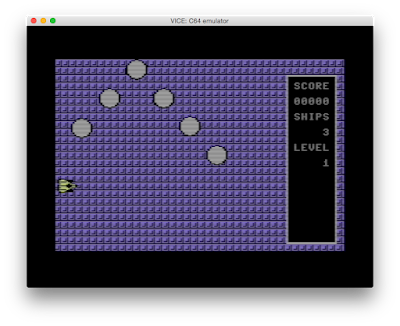 This game, mostly in BASIC but with a few ML routines, is not bad! A horizontal scrolling shooter (but with only vertical movement, so almost more of a sideways invaders) with enemies that move in simplistic patterns, but each level resets the pattern, and finds a cool balance between randomness and predictability. Things are a little flickery-feeling, and transitions like the explosion when you get hit could have used more attention to detail, but the music is hypnotic (if repetitive) and overall I'm gonna say Rating:3/5 but with a cool "variations on a theme" aspect.

A simple deathmatch with character graphics, but bullets ricochet and bounce in appealing ways and impressive numbers! You get faster bullets if you're moving when you fire, but it's ridiculously easy to run into your own shots - you need to adapt your firing stance accordingly. Need to try this against a person (2 player mode only) but it feels like it could keep its Tentative Rating:4/5
This game plays a lot like "Jumpman" but look a bit like "Impossible Mission". It's super tough! I was just barely patient enough to learn to make it through the first level(and even at the slowest speed) but I felt if I had more patience I could have gotten into it. You play a jewel thief in a very low grav environment (so falls won't hurt you) You're pretty agile and can jump high and far, but some jewels will be out of your reach: for those you need your abilities to pick up ladder (just pressing fire when on a ladder) or floor pieces (down and fire) and move them to useful places (same buttons to put parts down) You are hounded by Robot Sentries that patrol back and forth in diagonal or straight back and forth patterns.... periodically they raise an eye, adjust their pattern, and resuming their pacing in space. A little thinking goes a long way then; luring them to patrol a part of the screen away from where you want to focus, not panicking when one comes your way, learning the diagonal pattern they travel in. With 24 screens, this is the best level design I've seen so far in Gazette (you can press R to advance to the next level.) Honestly they wouldn't have been poorly served with infinite lives... still, really great and fairly original game, Rating:5/5