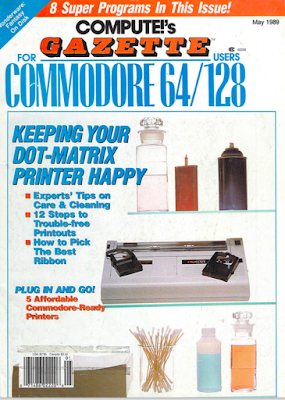 The cover reads "Keeping your Dot-Matrix Printer Happy: Experts' Tips on Care & Cleaning" and suddenly I have a vision of a "dot matrix happiness specialist", and thinking how lonely they must be these days.

The Editor's Notes talks about how many submissions they get; they claim 30-40 a week, down from 300 a week in 1984, and a notable decline the past year. WOW! They... must have seen a LOT of crap submissions, to be honest, because some of those early submissions were real stinkers. Steve Harter mentioned getting $5,000 with the upfront plus royalties, so there was money to be made. (Once I get through the run, it will be interesting to plot out the scores, though I know I'm hardly unbiased and even my own scoring system probably shifts as I start feeling more or less sympathetic.)

Maybe many of the submissions were apps and not games? They do mention rejecting stuff like "Bowling League Secretary" for being too specific (though that sounds more useful than some stuff they do... I remember writing a Dart Team Secretary app on my PalmPilot) and also that they judge program on size, since people are going to have to type 'em in after all...
Just from the table of contents, by hopes for a Mark Tuttle game named "Verbatim" were pretty low, and I guess they were met. This game is a bit like Mastermind meets Hangman. You can have the computer pick a 3-6 letter word or play it two player and have a human enter the word to guess. (I guess people suffering from severe short term memory loss could rig a one player game with that as well.) Anyway, you get five guess, correct letters in the right position are shown uppercase, used letters in the wrong place are lowercase, wrong letters are shown inverse. (I caught the game halfway through it's victory color flashing.) Rating:2/5
Knock-knock. Who's there. This random vegas card game with 3 computer opponents. This random ve- aw, forget about it. Rating:2/5