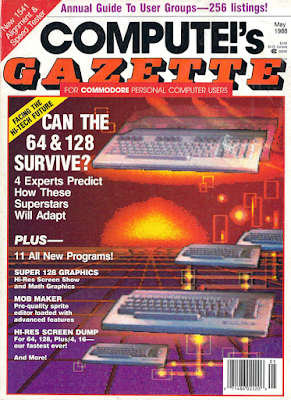 Editor Notes talked about the results to the reader's survey: "Nearly 9 out of 10 readers program their computer". I wonder if that says more about the era or the hardware or just this one demographic.

Good quote about the Commodore's Future: Robert Jacob of Cinemaware saying "The golden age of Commodore software got started just a few months ago." A lot of that was the installed base it enjoyed at this time. (And while I value how these computers got me programming, I switched to Commodore because of all the fun piracy being had, it was a more vibrant game scene than for the Atari 800XL I had been using.)

This issue also has "Mob Maker", kind of an enhanced "Sprite Magic" that lets you see multiple sprites at once. ("Mob", Movable Object Blocks, were a Commodore term for Sprite.) 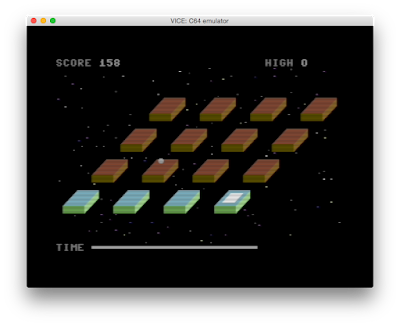 At first I was worried this (admittedly graphically stylish) game was going to be the magazines second or third nod to Q*bert but it's a bit more focused... you control what's in effect a 4-square Snake... you're blocked by your own body segments, though they don't kill you (unless you trap yourself in a corner and have to wait for time to expire.) You have a short amount of time to sheepdog the bouncing ball into a corner, at which point you "tap its kinetic energy" and move to the next level. It's really tricky- the ball can't "choose" to jump onto a square of your tail, but if it's already in motion to one it can't bounce away either. I get the feeling there are some basic strategies one would soon learn, but I don't quite have the patience... anyway, neat idea, with great graphics and sound. Rating:3/5
This game has some of the cutest sprites - only Q-Bird comes to mind as cuter. Anyway, this game is a bit simplistic, you control the little bubble, avoid sharks and picking up the treasures mysteriously crawling along the seafloor. Your air supply slowly depletes, and needs to be replenished at the ocean surface. Every chomp from a shark increases the rate your air goes down, though interestingly the indication of that is primarily auditory. Also you can hit the fire button for a turbo boost that really use your air quickly. Still, there's not enough to this game (despite the 4 speed levels, from ludicrously fast to annoyingly slow and jerky) Rating:2/5