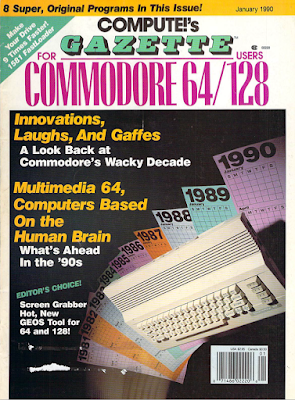 Ah, the 90s. Though first a look back: "Innovations, Laughs, and Gaffes: A Look Back at Commodore's Wacky Decade"- I think that's the best headline I've seen in the magazine. (The article is pretty interesting.. some oddities like a 198 games-centric unit that sold mostly in Japan, kind of a tweener between VIC-20 and C=64) In general it marks the beginning of a troubled year for the magazine... there's a gap in the summer, and when the magazine comes back (after a purchase by Omni/Hustler group) it is as an insert in COMPUTE (which lost its exclamation point in the transition.)

I love that there was a Commodore executive named "Max Toy".

Heh. The Letters to the Editor is better than usual... "where can I join a copiers' guild around Indianoplis?" (sorry we don't support piracy) "my game got ruined- how can I contact Epyx?" (we think they might be kind of out of business) "What are spreadsheets?" and finally "What happened to those books you used to advertise?" The last one tugged at my heart strings a little, they mentioned Clark and Kathy Kidd's Commodore 64 Games for Kids... I remember my mom giving me that one, as kind of a down payment on me getting a computer in the future... sometimes I forget how tight times were for my parents. (In high school things got a bit better, but because of life insurance from my dad's untimely passing. Silver lining to a super grey cloud.) But I digress.
Boring Education game, and frankly any flag that's not a simple tricolor is suspect, they didn't go out of their way to render more complicated designs. Rating:2/5
Flickscreen Platformer... probably Montezuma's Revenge is the most similar game I can think of. It's funny how restrictive the action feels, in this post Super Mario Bros age... you can't jump on or off of ladders, control your jump once it has started, any fall taller than you is deadly. Still, those limitations add a nice light puzzle element to the various boards. I guess your goal is to rescue the princess (as well as collect items, I suppose), there are a lot of lock and key puzzles, and overall it's not too shabby! Rating:4/5