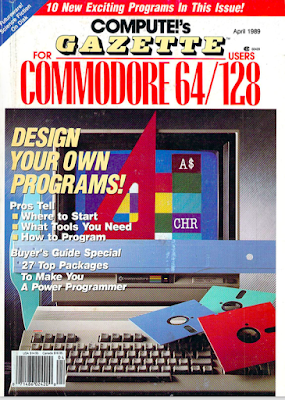 Interesting cover change, using 1/3 of the front rather than 1/4 for the title, and shrinking the main title for space to emphasize the name of the computer... seems like it might be targeted at solving "new reader" issues at the newsstand level.

Also the main feature description on the cover is pretty exciting:
DESIGN YOUR OWN PROGRAMS!
Pros Tell


Man... if only my subscription hadn't run out before then, I could have saved a lot of money on my comp sci education! (I kid, I kid. Actually tooling around on these machines was a big boon to my comp sci days, even if I went to college figuring I'd major in English.)

Actually the Editors Notes talk about how the percentage of readers programming went from 89% to 77%, and that probably more readers were new users.
This game feels like a gussied up Star Dragon... there's an animated star field, a better looking player, a variety of minor graphical swaps for the enemy of the board, more chaos in the enemy movement,  but the game play is still really hollow. Your gun is one of those ones where you have one bullet active at a time, and bullets travel til they hit the worm or the top of the screen, so partially out of boredom you take risks so you can get that nice machine gun effect... or it would be nice, but the lack of sound takes away the visceral pleasure say River Raid had with the effect. As you plunk away the worm eventually shortens, no matter what segment you hit. If they had followed the lead of Centipede, and maybe had a body segment become a head if you hit the middle of the thing, so that you then had multiple enemies to dodge (like a primitive Buster Bros.) this game really might have been something. Rating: 2/5


Heh... like last month, there's a C-128 BASIC port of an old arcade game, by Leonard Morris... this one is a knock off of Amidar - I game I never saw in the arcade but played on the Atari 2600. You run around a boring grid, sections you pass turn color, and when you turn the color of all 4 sides the square fills in. Pressing the fire button (or on higher levels touching a magic paint splotch... it wasn't clear in the game whether it was an enemy or a friend) knocks out the lonely enemy pursuing you. More enemies would have helped. I figured this was another silent game until the end level music game up, and then I merely wished it was another silent game. Rating:2/5