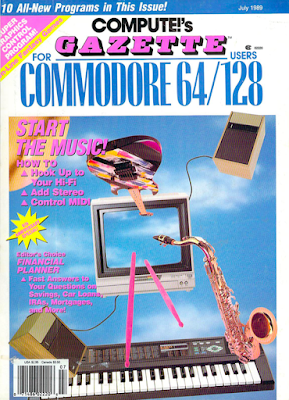 The Editor's Notes talks about it being the 6th anniversary of the magazine, and how crazy software sales were until the shakeout of 1984... which is funny, I thought the narrative was more that the video game industry crashed, but that a lot of people ended up moving to home computers, until Nintendo revived games-for-games-sake...

An article on fantasy games mentions multiplayer online games... kind of a prelude to MMORPGs I guess, though I think many were turn-based. (Frankly, few games without a physics "engine" catch my eye for long.)
No, not THAT Mine Sweeper. A very pretty game, but brutally difficult. You fly left or right, but it doesn't seem to affect the movement of the mines that drift in various patterns for you to destroy. Destroy enough missiles and a boss enemy shows up with its laser firing back. Again, beautiful (especially the turnaround animation and the cityscape below) but difficult and ulitmately there's not much there there. Rating:3/5 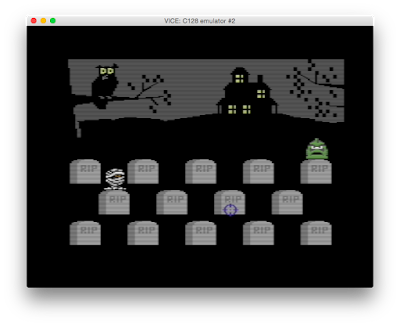 Cute Monster/Halloween themed C-128 BASIC game. It's a shooting gallery, various monster heads pop up behind tombstones, and you control a crosshairs (that hops in half steps rather than sliding around smoothly) and try to use your zapper on them. The game ends after 10 misses or monster escapes. Very cute graphics! Rating:3/5
Didn't the "Education" stuff used to be in its own section? Anyway, this is a simplistic math drill... set up the type of math and the difficulty, then move your crossbow left and right to fire at the correct answer out of 4. There's a bit of a timer on the lower right. Rating: 2/4