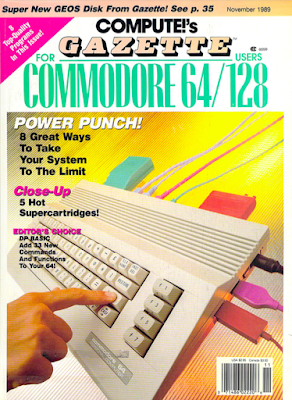 Huh, Editor's Notes says the C128 is no longer going to be produced. Too bad, seemed like a cool system.

Kind of pretty "don't hit things" scrolling game. Interesting that the player's boat is drawn at a few different angles, and the gator is nicely animated, but the "hovercraft" coming at you look like escapees from an Atari 2600 game. Rather too difficult thanks to touchy collision detection, and apparently your boat is coat in nitroglycerin, because any hit leaves you a square shaped firework. Kind of endearing how one of the 8 rock patterns the article describes make up each level has the authors name Tim "hidden" in it. Rating:3/5
There's either a mandate to have at least two games an issue, or they're just really missing the "education" section, because this isn't even a math drill, just a press the button and see the answer thing. Rating:1/5