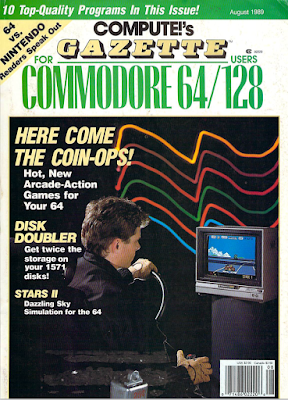 I admit I am (mildly) amused by the "64 vs. Nintendo" banner when "Nintendo 64" has been such a big thing in my gaming life.

"Sprite Clock" puts a tiny clock in the corner of your screen. I gotta question the utility of that...  mostly because you have to enter the time each time you start it up but I also wonder about the resources it might be using up. (I admit being envious of Win95's clock when my b+w laptop was stuck on Win3.1... I made up my own in Visual Basic, and was surprised when I brought it to my desktop and found out I had chosen an obnoxiously bright pink for it.... ANYWAY.)

This is the first time I've noticed a "Editor's Choice" badge, awarded for this game. (The astronomy program "Stars II" got the same honor.) Again, the usual disclaimer of I haven't tried this against a human yet, but it seems kind of lackluster. Two player only arena deathmatch, the gimmick is each player has a single "boomerang" - after you fire it and it misses, you have to go retrieve it from where it's stuck in the wall. (Oh, also the arena walls are randomly generated, and each player has to "approve" the layout) The boomerang is a bit misnamed... it doesn't return to you but you can steer it, along with your player, to track the other player for a limited time. (I realized that the mechanic is not entirely unlike my own original Atari 2600 game Loaded4Bear (plugplugplug), except you are still moving after firing (and there's no camouflage aspect)) Tentative Rating:3/5

"RUN FOR YOUR LIFE! THESE TOWNIES DON'T TAKE TOO KINDLY TO STRANGERS" reads the header. Townie? Really? Anyway. Third month there's been a derivative C128 BASIC game by Leonard Morris. This is exactly like last April's Amidar clone Brusher, minus the "fill in the squares" aspect, and plus one extra enemy. Like some of the other C128 BASIC games, it has that negative pattern where you can only change character direction at certain intervals (in this case, when you hit the intersections) - I'm 90% sure there's a C128 BASIC command "smoothly move sprite to new location", but if you depend on that, the responsiveness of the game really suffers. Press button to remove enemies once per level or life. Rating:1/5