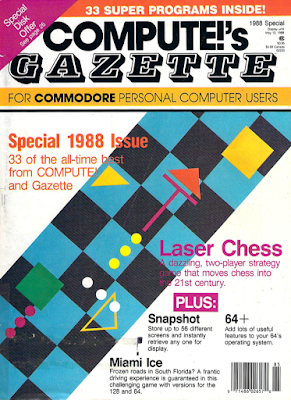 This is an end-of-year, Gazette and COMPUTE! "best-of". (Oddly, there's a different "best of" but I'm not sure I'm finding the disk for it-- also, the magazine is oddly devoid of screenshots or illustrations so, oh well.)

I'll just cover the 3 games I don't remember seeing in the magazine.

Ugh. When you launch this program from the menu it tells you it has to be copied via a special program to another disk, and frankly I'm not feeling up to it at the moment. I vaguely remember this program, maybe from COMPUTE! itself, and it's kind of an intriguing idea (plus the lead in paragraph mentions it won a $10,000 first prize in a contest) It's kind of a cool idea, beside some typical-chess moving and capturing there's a laser cannon, and then various pieces have reflective and beam splitting surfaces. Tentative Rating:3/5

Funky little strategy game, with an optional computer opponent. Players alternate placing bombs on an unoccupied square or one with bombs of your color... each square on the slightly asymmetrical board can safely hold one less bomb as it is touching other squares (i.e. corners can hold one bomb, sides hold two, inner pieces 3) and when you add one more bomb the square "explodes", throwing all the bombs it has to the neighboring squares, and claiming them for your color... and if they in turn overfill the neighbor, the chain reaction continues. Rating:3/5
A kind of nifty physics-y game harmed by being overly difficult, and by skimping on the movement graphics (Like Rally Racer and Quolerus, the main character only points the primary 8 directions, though the movement has more subtlety in it.) The article mentions the 128 version was first, and the 64 port feels rushed and is insanely touchy- even though the 128 is in (its admittedly superior) BASIC and the C=64 is in MLX.  The goal of the game is to get your car across an incredibly slippery road and into the garage at the end. Rating:3/5