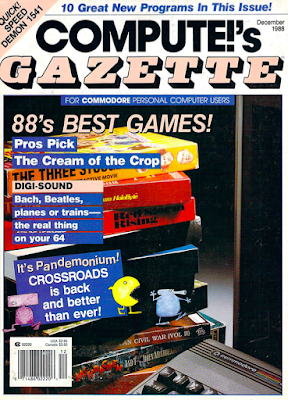 This game, with its sequel to the brilliant Crossroads, is a mystery to me about my history, in terms of I feel like I didn't see most of the games this year, but I'm pretty sure I was playing this one as a kid. (Come to think if, I definitely messed around with this issue's "Digi-Sound", that used the Datasette tape player to make your computer into a primitive audio sampler.)

Anyway, the issue has a rundown of the best (commercial) games of 1988. Still striking to see when Tetris was new, since it feels so eternal.

This issue has the results of the previous teamup with Berkely Softworks for a programming contest for GEOS... (see this blog entry I found about 'what happend to GEOS') The First Prize winners got $1,000 in cash, and they over $25,000 in cash and prizes was awarded. Despite that, a lot of the "Desk Accessory" categories only had one entrant. The page mentions plans to release a shareware disk of the best of the entries, but I can't find any trace of, say, "GeoWar" (Lysle Shields' winning game) anywhere online.
A nice followup to last year's brilliance. Game play is very similar to the original. New features include a host of new monsters (including White Skull, a dangerous Green Vacuum, a helpful Brown Dog ally, and even 2 two enemies merging to become a more dangerous Pink Tagteam) and new spar types red and blue (speeding up your fire rate and your running and making you feel a bit like Rambo.) Some differences in play include how players are able to move while enemies are warping in, and enemies warp in in dribs and drabs in later parts of each level. 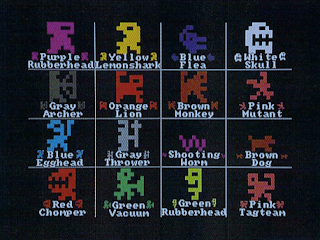 There's also a Maze Editor I didn't have much luck with... I got that I had to hit fn-F12 to hit "restore" and active the editor but then it kept slipping back into play level mode. (Interestingly the game saves a new copy of itself rather than dealing with levels piecemeal.)

While the new creatures and spars are fun, I think I prefer the elegance of the first game, with its time to plot strategy, and stronger consistency, in terms of having the original set of monsters be your visible goal throughout the play of the level.  Still it is probably the second finest game the magazine produced, so Rating:5/5
You can kinda sorta judge how much enthusiasm the magazine staff has for a program by where it shows up on the disk menu, and this thing is unceremoniously the second item on the second page (or maybe that's a subtle joke about its two board nature?)  So anyway, the goal of this two player only game is to get 5 in a row. But there are two boards, and when you place your piece on the left board, you place a second piece on the right board, in the square with the corresponding number. There is another rule, kind of like reverse Othello, where if you put a piece directly between two enemy pieces (horizontally or vertically only) the other pieces swap to your color. My first guess was this game would result in a lot of ties, but when I twice tried to play to stalemate, I inadvertently got the game-ending five in a row, so maybe there's slightly more to this game than it looks. Rating:3/5