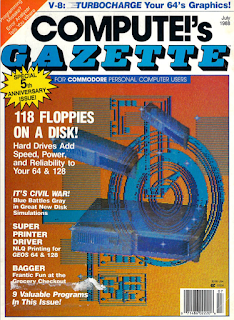 The Editor's Notes goes meta, looking back on 5 years. (The main feature of the first issue was "Does Your Computer Need a Cassette Recorder?")

An article on hard drives mentions they were a lot cheaper for the PC, like 3x as much, for a (whopping) 20Mb... there's also a feature on Civil War games, on the 125th anniversary of it.

There was an odd bonus program "Musical Zippers" that messed around with playing some well known songs at the same time, and then pulling them apart octave wise until they were more recognizable, and with an appropriate visual display.
The arcade game Tapper, but stripped down. (You have to figure out how to hit the "Run/Stop Key" on your computer-- fn-esc on my mac) Grocery store patrons come in from the left, you have to maneuver to the correct counter and press the button to sling some groceries at them, when patron and groceries collide both just disappear. Also you have to be in position to catch tips coming at you. Rating:2/5 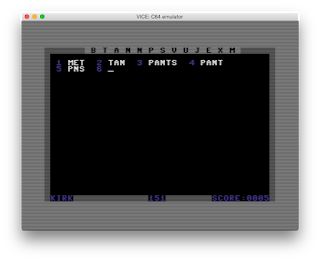 I was going to judge this harshly as something that could more easily done on paper, but that's only 2/3 true. The computer picks some scrambled letters, people take turns trying to find words in the mess. The computer has no dictionary to judge if you have real worlds, but it does some score-keeping and making sure you don't reuse letters or duplicate words.  Rating:2/5