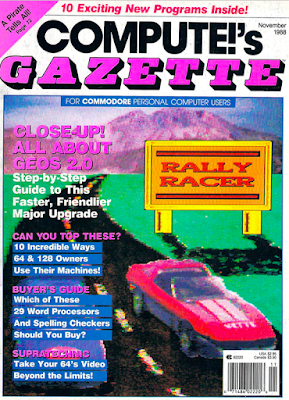 From the Editor's Notes: "In 1984--the heyday of the boom--some industry analysts sanguinely predicted that by the early 1990s, every U.S. home would have a computer. Now, with the benefit of four years of hindsight, we can see this statement as hyperbole borne of enthusiasm." How far off was it, I wonder? I mean, I guess "every" is a big statement, and maybe we're only near that in my world of white/middle-class privilege. But if you include smartphones- well, computers are pretty frickin' common at any rate.

"10 Incredible Ways 64 & 128 Owners Use Their Machines!" included a woman abusing a local radio station lottery by using a VIC-20 to check for winning numbers within 30 seconds... not bad!

Interesting game cheat bonus program "Sprite Killer" letting you turn off sprites in other games (often a useful way to cheat in games that depend on Sprite collision detection) and adding a pause function.

Two player overhead racer, with a kind of nifty track editor. I don't know if it's the control (limited to 8 directions of travel, despite the left/right turn control, and making a big deal about generating sprites at the outset) or the weak physics (unceremoniously stopping when colliding with a side, and no cornering to speak of) but it doesn't live up to its seeming potential. Rating:3/5
A C128 BASIC game. It plays like Connect 4 meets the card game Set... players alternate picking a tile (with a distinct color and pattern) and which chute to drop it down. The lack of animation or audio feedback about what patterns scored what points really hurts the fun of this game. Rating:2/5 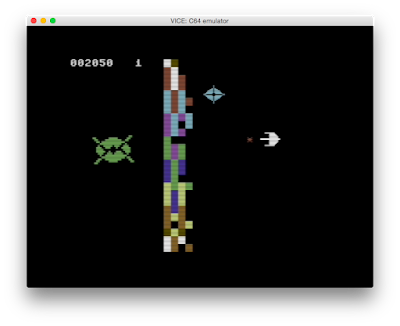 Based on the quirky name and the screenshot I could have guessed this was a "Yar's Revenge" knockoff but I was startled to see the title screen come out and say so. I guess Atari had lawyered-up? (I can sympathize about the Atari lawsuit machine, given that I had to change the name of my own 2004 Atari Homebrew from JoustPong to FlapPing - apparently Atari feels it "owns" any name with Pong in the title, and here I was thinking it was the Joust (since I copied out sprites and sounds from the 2600 port) that was going to get me in trouble...) Some previous Gazette game (e.g. Bagger) were much more blatant ripoffs of more established titles...

Anyway this game loses almost all of the kinetic, frenetic joy of its source material. The protective fortress of the original game's big baddie has been moved to be a central band (akin to the static-y safe zone of the original) with its columns of tiles moving alternate directions... tiles you have to grindingly sit and blast through with your peashooter canon. Yar's ability to kind of enjoyably 'chew' through blocks is gone- these tiles are deadly to the touch. Control is a bit Asteroids ship-y (though with more friction) except, like Rally Racer, terribly disappointing in that you only get the 8 compass directions. Small little saucers come out to harass, but they move slow, at least on the first few levels which is as much as I bothered with. Rating:2/5