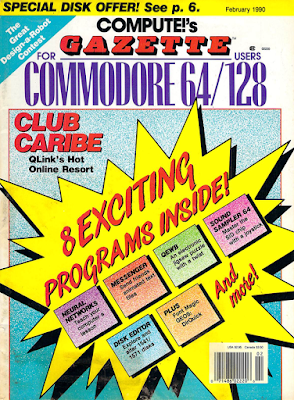 Man, the cover is looking a little low-rent.

The Editors Notes is kind of self-flagellating, talking about the C=64 techspecs were't keeping up and so not much 8-bit talk at COMDEX...

The feedback goes into depth helping a reader make a primitive learning system, so you could type "A BEAR IS A MAMMAL" and "A MAMMAL IS AN ANIMAL" and then ask "WHAT IS BEAR".

There's big coverage of Quantum Link's (which became AOL, which in turn just bought the company I work for) Club Caribe, spun off of Lucasfilm's Habitat, it was a really intriguing graphical online community, with people's avatars walking around a 2D space... worth checking out about especially if you have any interesting in MMORPGs and the like.

Not sure if it's just my D64 image or what, but the menu program crashes on boot with a "STRING TOO LONG  ERROR", disconcertingly.
Some kind of Tetris descendent. The action though is sideways, and optionally even double sided (alternating "falling" to the left or the right), and with other options where the piece rotates every click, and where the fallen pieces shift over a spot every turn. I didn't play this very long, and reading the instructions I think it lacks Tetris's trademark "fill in a solid line so it disappears" goal; instead the goal is to just get as many pieces in as possible. Rating:3/5
A "Circus Atari" (guess that was originally "Circus" in the arcade in 1977) clone but with a sparser selection of balloons and only one bouncer - using the paddle(!) or the joystick (paddle is default press F3 to start with the joystick)  you maneuver the trampoline to safely catch the clown, and then bounce him up toward the next balloon. Nice feeling game, and the "splat" animation is kind of amusing. Rating:3/5