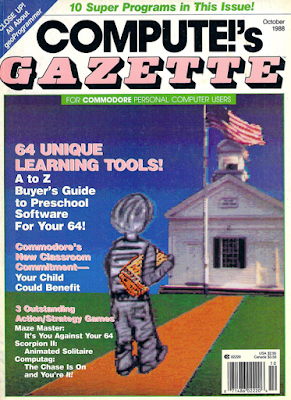 I've ben enjoying making this blog immensely, it's a nostalgia trip, and fascinating to dig up and think about these old games from a gameplay perspective, and the magazine as a whole from a cultural perspective.

At the risk of being self-indulgent and melancholy It's odd for me to think about this issue having a cover date the same month as my dad died. Not that he was much of a technologist, but it's strange how in some ways he was frozen in amber at the same cultural moment of this magazine... I really wish he was around to see the way culture has shifted in some fun online ways.
A solitaire variant. I guess it's ok. Funny see a sprite acting like a joystick-controlled mouse cursor. Rating:3/5
A one player splitscreen Pac-Mac-ish game (sans enemies) where you try to navigate the maze that you can only see a part of and eat more dots than your computer component in the left window. (function keys adjust the speed of the opponent but it's always pretty tough) Game is over when player has eaten half the dots. I like how if you're cruising the outer edge of the maze you can see that "MAZE MASTER" is printed outside the confines. Kind of clever, but not the deepest game. Rating:3/5
In theory I like 2-player games, and one-button games, but this one is a stinker. One player is "it", the other player tries to escape. Every time you press the button you move one space in the the direction the arrow your current space is pointing. There's a lot of waiting. There's a germ of an interesting idea here, but it need something... maybe competitive control of when to make all the arrows rotate (here they adjust on a timer.) Rating:2/5