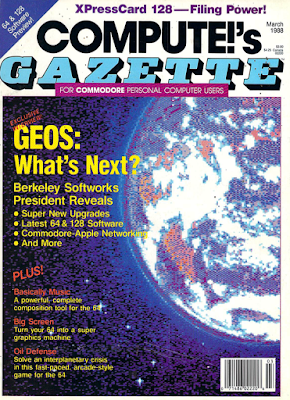 The magazine, especially the cover, underwent a graphical overhaul! Rather than multiple hand-drawn-ish images, each issue features a single splash image that looks like it might have come from a Commodore computer.

It's interesting that despite being "For Commodore Personal Computer Users", Amiga never seems to fit in that category. Which is fine for my purposes, but kind of intriguing from a historical standpoint.

Editor Notes that Commodore is recovering a bit, but feels like too much of the growth is international, and they really want to shore up their presence in the US market.


It sounds like you're suffering from an untoward event known to computer users as a system crash or lockup. Unfortunately, it's a normal part of computing.

Guess it will be a few years before they coin "Blue Screen of Death" (The column also mentions how far home computers of that day are from what would later be available in Babelfish and Google Translate...)
This game has a theme similar to the arcade classic Rip-Off... (found some interesting behind-the-scenes coverage of the AI in that gem) -- aliens are out for your resources, and threaten the player only as an afterthought... in this case, the UFOs are hungry for your oil! (But they are still a threat to you, slowing you down? Except there's not much visual or audio feedback about that - I thought my joystick was messing up.) Your shots are steerable, which I found more irritating than helpful. I like the use of PETSCII graphics for the cityscape. Also the UFOs moved in appealingly random ways. Rating:4/5
This game looks and plays a lot like "Maze Craze" on the 2600. It's two player only and has two main variations, get to the other side, and grab gold (and return to your home base). You can set the number of drones that hit you and send you back home, and there's also an option to play invisible mazes. Tentative Rating:2/5