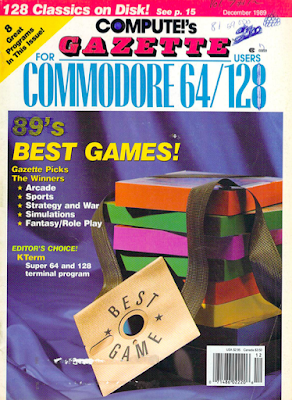 Huh. The Article Notes mentioned switching to saddle stitching, so they can finally succumb to reader's requests to put the program listings next to the articles.

Fred D'Ignazio's "D'Iversions" column mentions getting a lot of mileage from talking about Nintendo vs 64 for games, and describes one passionate fan's letter, including an anvelope with pro-64 slogans like "Down with Nintendo! Too many people like Nintendo better than Commodore! Bogus, dude! Most untriumphant!" Guess that's as good an end of the 80s as any.

A lot of games reviewed here, including "Omega", an interesting program-a-robot-gladiator-tank game. I enjoyed it, but by the time I hit levels where the "sit and wait for enemy to come to me" strategy didn't work I hadn't learned how to build a better fighter. Neat idea though.
Attractive but complex "juggling" game. 2 or more electric sparks are travelling down through winding circuits, and you have to direct them into these pyramids (that take multiple hits with the circuits to destroy) and not let the circuits hit the circuit break. (I think "Circuit Break" would be a better name for the game.) Control is odd... left and right switch the mode of a left and right facing gate, up rotates a circular switch, and bottom changes the colors of these little teleporting things. I dunno, maybe I'm too tired but it was all too much to keep track of for me. Offers a cooperative two player mode as well. Rating:3/5


Like Chopper Pilot and I think one or two others, this title chooses to have you fly right to left. Strange that that feels so odd to me. Another graphically rich game, it takes place in phases: take-off, alternating strafing ships and bombing tanks, and then landing. The gameplay itself is pretty simplistic. Rating:3/5