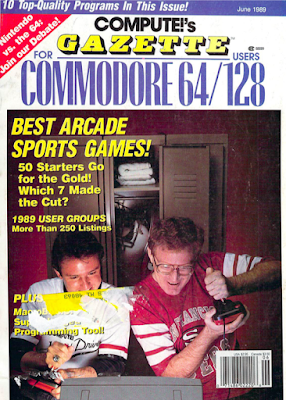 Advertising Snippet of the month... for "obvious" reasons I remember this ad/cover for SSI's AD&D game "Curse of the Azure Bonds". (Headline of the Ad: "This Summer, It Won't Be the Weather That Makes You Hot") 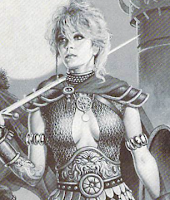 Could the "Azure Bond Curse" be one that forces extremely poor choice in armor? I mean, isn't the that the part armor is most meant to protect, right there?
When I reviewed the original I missed that "Jericho" is the name of the "supermoth" that is the ball - and you are (for some odd reason) asked by your naive competitor to help protect his Kilt-ish wares, but traitor that you are you use your double paddles to help ensure Jericho's complete victory... anyway. Given the name of the game, it definitely feels like a story tacked on by the staff, but the sequel uses graphics to make the moth aspect much more blatant. This is a two-player-only sequel, each player plays a 4-wall Breakout clone and tries to get "their competitors" pattern (that their paddles are surrounding, oddly) eaten first. Five rounds, each one adding in an additional supermoth. Probably the biggest problem with the game (besides its repetitive sound track of looped insect-y noise) is how long it would take: Each kilt square takes multiple hits (cycling through colors) and even running at 40x warp speed in VICE (something I'd recommend, actually, watching the kilts get eaten is kind of cool and chaotic) a full game takes around 45 seconds, which I think means an actual game would take upwards of half an hour. I think starting on level 5 would have made a much more doable, if chaotic, game. Tentative Rating:3/5
A "spot the difference" game for 1 or 2 players. 4 panels are displayed, one character is different in one of them, press the number of the differing panel. Game continues indefinitely until you hit "0" to stop. Some of the character sets they chose were very clever, making neat visual patterns with the 2-4 characters used. Still not much of a game I'd want to play. Rating:2/5.