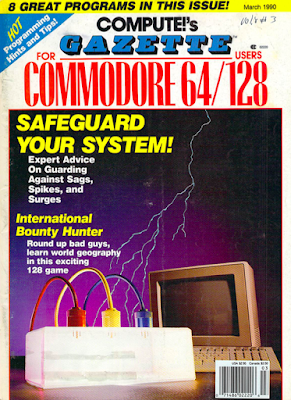 One of the Letters to the Editor carries an air of pathos, some VIC-20 fan offering tips on scouring libraries to get software... in 1990 that was an old machine, and then the letter suggests


One more idea: If the reader has access to an IBM PC or compatible with a modem, Computer Shopper runs a list of BBSs by state. He could tie into one of those and find out if they carry a "For Sale" conference. Post a message asking for VIC-20 or Plus/4 equipment. Be prepared to wait for an answer though--I'm just now getting some feedback after three months of waiting!

On the other hand, another letter corrects a small point about the VIC's character resolution and says "I got rid of that archaic beastie, but I still remember a lot about it." So maybe the IBM PC access-having user is actually looking at it from a retro-perspective.

Of course, this is in the shadow of all the 8-bit Commodores looking long in the tooth, with the C128 discontinued and the beloved 64 coasting on the size of its installed userbase.
A follow up to 1987's Bounty Hunter (focused on the USA), this C128 game replaces the former's neat PETSCII graphics with mere low-rez colored blocks. There's a country name mode and a more challenging capitals mode... an asterisk on the screens shows you the general location of the bad guy, and you have to type country (or capital) name of a neighboring nation to head towards him, capture him, and then head back to where you started. I think it's a pretty cool learning idea. Rating:3/5
Mixed feelings about this game: one the one hand clearly it's just a knock off of Thrust, but without the awesome music. On the other hand, that's a pretty cool and ambitious game for a magazine. On the third hand, it's so difficult to play in emulation, because it uses the keyboard (since it needs both fire and shield/tractor beam) and the mapping is wonky. On the fourth and final hand, even after setting up a mapping in "Joystick Mapper" (on the OSX it's Left Ctrl, Space for the buttons, Left Shift for turning right, Left Option for turning left, and Cursor Down for Thrust) it was still a super difficult game, to the point of not feeling like much fun. Rating:3/5