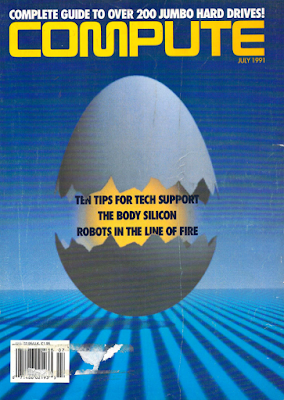 Article art of the month (for COMPUTE, not Gazette, alas): 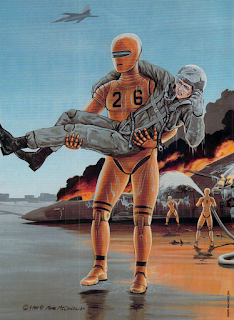 On to the games!
Quirky digging for treasure game... unlike Dig Dug, boulders don't fall (but they can be pushed) and you don't know what's in the dirt 'til you dig it. Besides immovable granite blocks and gold, there are two hazards: "methane pockets" (heh) that roam around in semi-predictable like giant energetic amoebas, and uranium deposits that cause radiation to slowly spread through the passages, lava-style. Both can be blocked by boulders. Anyway, get gold and bring it back to the bank at top. Some clever stuff here, if not quite fully realized, so a low Rating:4/5
Ambitious for a BASIC game! Your party of 6 (not that there seems to be much difference among them except for the graphic) wanders through a traditional BASIC dungeon grid, sometimes running into a monster... you then get to pick which adventurer gets to aim a little crosshairs at the jittery foe. WAY too jittery, even running the game at halfspeed I couldn't reliably get a kill, and if you miss your one shot, your adventurer is dead. Yadda yadda reach the last room. Rating:3/5 because of the graphical variety and ambition.
Fairly simple addition and multiplication drill program... steer your ufo to hit the right number to solve the equation. I'm not quite sure who it's aimed at though, it feels like anyone who was at this level of math problem wouldn't have the dexterity to move the ship through the fairly fast moving numbers... Rating:2/5 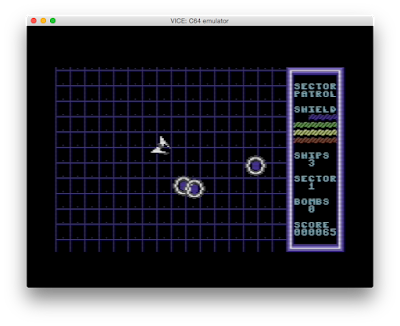 This month's bonus game owes a lot to Sinistar. You fly (smoothly, and in 16 directions!) over a grid. You are harassed (generally bouncing off a lot) these little warriors... you have a lot of shield but so do the warriors, each takes like 30 shots (what is it with super durable enemies and space games in this magazine?) and then they yield up a bomb you can release with space to take off the Renegade Unit that prompts at top tell you is being built offscreen. You have to have saved up like 4 bombs and then you can attack the large ship as it swoops in with some kind of bullets. It's no RUN COWARD or BEWARE I LIVE that's for sure. Rating:3/5