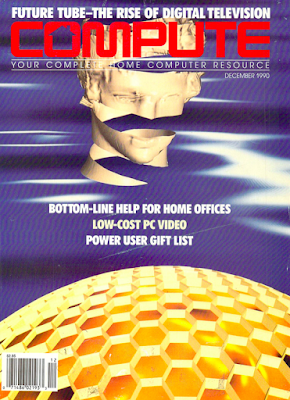 I admit I'm not reading COMPUTE too closely, but perusing the table of contents, it doesn't look like type-ins are much of a part of the other computer systems' sections... just kind of a special part of the Gazette culture.
A kind of clone of Adventure for the Atari 2600, down to monochrome windy dungeons, swords, and one-hit-one-kill chompy dragons. The dungeons obey more normal rules of time and space than Adventure, and I kind of enjoyed making the maps: 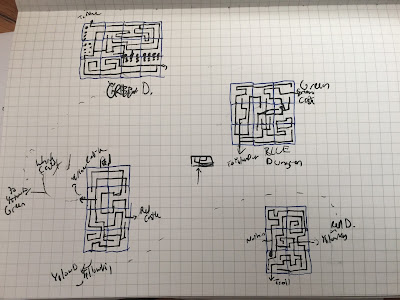 There's an awful lot of wandering to-and-fro, through, and I got bored/frustrated before finishing it. Kind of interesting tribute/clone though. Rating:3/5


Two player C-128 BASIC stock market game. First game I've seen use the 80-column mode, which shows up in the other screen in VICE. Rating:2/5
Pipe Mania meets sliding tile games, try to increase the amount of fuse the spark has to traverse. Pretty enough game, but really tough. Rating:3/5
Slightly ironic that the guys initials are "ML" but he writes in BASIC. And once again, proving the rule that adding an exclamation point to the title doesn't help boring games. Anyway. 2 Player turn-based memory/pathfinding game. It's not clear, but P1 starts has to start on the top row, and P2 from the bottom, and the goal is to find a path of your own color that reaches to the other side. You move the cursor and press fire to reveal if it's your color, if it's null (which means you get to guess again) or the other player's color (which ends your turn) The board is reset to everything hidden at the end of each turn. Rating:2/5
AFK (Aim, Fire, Kill) is odd - good graphics, a sophisticated gameworld, and then very little gameplay. Two players only, multi-screen, split-screen (reminds me of the old Spy Vs. Spy game), helicopters that player fly to each other and shoot, and that's about it. (You can fly back to base to recharge shields or something.) Tentative Rating:3/5