With the 1990 Gazette taking a hiatus, before being reabsorbed into the newly purchased COMPUTE, I thought I'd go finishing going back to issues 1-10 and plucking out the screenshots (of the games I'll probably never type in) and generally looking for interesting cultural bits of the era.

All games are for both C64 and VIC-20 unless otherwise noted.

Roam around a diagonal grid, using "sonar" to help encircle the one containing a C64 icon, and avoiding spikes.

A rare paddle-based game (which makes up for the VIC-20 only having one joystick port.) Players shoot lasers at each other.

Looks a bit like bowling for the Atari 2600.
The description reads a lot like November 1984's Jump!, with a flying craft doing damage to the terrain your land-based gun is traveling over, except there's no jumping.

Get out of the 3D maze, fire button for map. Wonder why they didn't port it.
Girders, ladders. rolling and falling barrels? Huh.
"Nonviolent, noncompetitive"- seems a bit like a fractal/A-life growing kit.

Descend through a narrowing tunnel.

Cat rescue! Looks rather kid friendly, you only lose points for running into the ghosts and bats.
C-64 only UFO shootin', but the VIC-20 Port in April 1985 was pretty good.
Collect the prizes, avoid your own tail and the leering smiley guards. Not sure if the smilies move.

Again we see that adding an exclamation point to the name of a lame game doesn't help. 2 Person surround. "This concept dates back to the early days of videogames" says the article- no kidding?
Suspiciously similar to Intellivision's Star Strike, but even more Star Wars looking.

The final pre-disk Editor's Notes glosses over Tramiel's resignation and talks about the pricing of the disks (the disks have been the topic of the previous two Notes) viz a viz copy protection and piracy.
Random Ad Snippet: 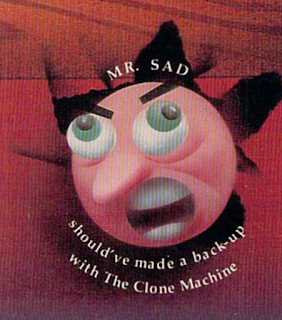 I think this game might be less interesting than it looks - move your gun mount up/down/left/right and stop the marauders.
Bingo. Ugh.