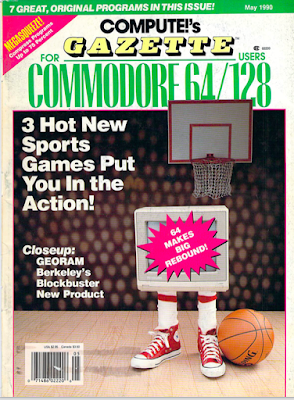 Letters to the Editor included one hopeful person asking if using an IBM drive to send information to a 64 meant the latter was "IBM Compatible", and another person looking for information on an alleged C128 GIF viewer (interesting from a historical point of view) but my favorite was:


Just a quick thank-you to switching to newsprint in your magazine. I know it was probably done for cost-saving reasons, but the newsprint is much easier to read as it cuts down on the glare off the page when there's a light overhead. A great win-win situation! Unfortunately, I don't think it will hold up as well as before if I drop it in the tub.


A very well done racing game, featuring different modes/terrains like dark tunnel mode (I like how your headlights makes a silhouette of the other cars, and you can't make out the sides of the road, just the lines) and the requisite slippery snow driving. Also the road snaked in a pleasing way that a lot of similar games don't manage. Most notable was just the well tuned behavior of the other cars and motorcycles... they have various drifting behaviors, and the acceleration control is great, so you find yourself racing up behind a dangerous driver, matching the pace, and waiting to make your move so you can zip on ahead - in that way it was realistic. (They're also prone to crashing into your car's rear, which isn't something I remember seeing in a lot of games. In fact, the only really glaring weirdness is that AI vehicles can pass over each other with a murmur.) I've probably been too stingy in my grading, so I'm going to say Rating:5/5 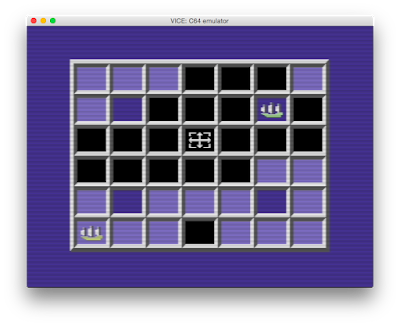 Odd little strategy game for up to 4 players but with a 1 player mode vs a single computer opponent. 2-4 ships are on a 7x6 grid of the high seas. Each player's turn consists of two parts: moving in any available 8 directions, and firing your cannon which renders that square of the sea unnavigable. The goal is to block all your opponents from moving, and you can fire on any unoccupied square except for the 4 dark blue starting squares, which are immune. I give it points for having a computer opponent (albeit one that's easy to beat) as well as supporting 4 players (not to mention a fine title screen) but then I take points off for the control scheme: diagonal moves are likely critical for your ship, but easy to mess up, depending on your joystick hardware. I know I have a weird habit of picking on the UI of this old stuff (like when I rewrote June 1986's Switcheroo for modern browsers to fix a UI issue) but if the author had used a cursor to indicate where your boat should sail, it would have been a much more robust game. Tentative Rating:3/5
It took me way too long to realize the title is a pun on "Sherlock". Anyway, this is a bit of a Mastermind variant... you cycle through various mugshots and try to guess face to name, a green match is the right face with the wrong name, a red match is a correctly identified suspect. You get an increasing number to identify through subsequent rounds, and each full set nets you a weedy rendition of "Saints Go Marching In". I liked the portraits... the guy on the left looks a bit like Osama Bin Laden. Rating:3/5