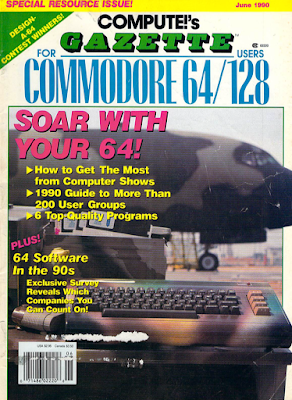 This issue marks the end of an era, the final self-contained print issue of "COMPUTE!'s Gazette". It's not the end: after a "summer break" it reappears as a supplement in "COMPUTE" (losing the exclamation point) until 1994, where it becomes a disk-only "magazine" for a bit over a year, and then ends.

The Editor's Notes has some responses from the reader's survey including


C'mon guys, how am I gonna brag at the user group if you don't print some of my ideas, which are better than some I've seen in your mag? I'll give you one more decade, then I ain't gonna renew my subscription.

I like the optimism! On the other hand, the Notes' close of "See you next month." rings sad and is factually untrue.
A C128 BASIC Addition and Subtraction drill game. I suppose it can also be counting / number recognition: the top number of flies fly in, and then they are joined by more flies for addition, or the hungry frog gets a treat if it's subtraction. The animation is super cute but could really use some sound effects. Rating:2/5 (Points off for the usual "wasn't education a separate category? not really much of a game" complaint)
Ah, the age old "The planet is at peace because nations have settled on these gladiatorial battles" scenario... has that ever happened? So after getting some extremely nerd-ish menus to pick the battlefield layout (Open, Lattice, Diamond, Cyclone, Quadrate, and then Random) the physics-y battle starts. Bullets are distributed around the field and need to be picked up, and are only dangerous (and only to the other player) for a short time after being fired. What makes this game unique are the obstacles: the blue diamonds are convex pyramids, while the grey diamonds are concave pits, and each affects the motion of players and bullets... in fact the large pit shown in the screenshot here is enough to trap an unwary player, who would have to rock back and forth to escape, like a car in a snowbank, and thus be super vulnerable to the opponent. (Also the little yellow grid is a random warp) A cool variation on an otherwise stale idea, I really want to try it against a human, for now let us be optimistic and say Tentative Rating:4/5