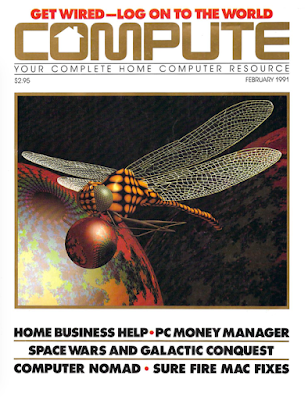 I wonder if it's telling that the Table of Contents for the "Gazette Subscriber Edition" occurs before the main Table of Contents? (Actually, does that title imply the normal issues, like in the store, didn't have the Gazette supplement? Not sure. Hopefully all my COMPUTE scans will have it!)

Heh, I did spy this one page ad: 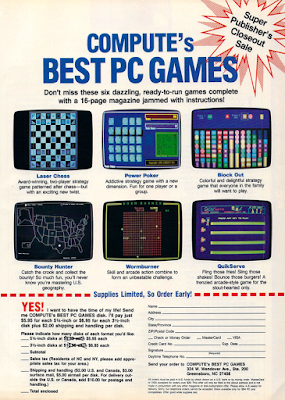 I remember being underwhelmed by Gazette's tepid Tapper clone Bagger, can't imagine QuickServe being that much better... it really shows how much more vibrant and fun the Commodore was than PCs, at least in the 80s.

Another great headline from the Gazette "News & Notes": "How About Four Megs of RAM?" That must have seemed unimaginably huge to the 64K (like 38K free) Commodore. And now 8Gb, or 8,000 Megs, or 8,000,000K (ok, all roughly) like I have on this Macbook Air is absolutely nothing special. I guess that points out how PCs would ultimately win out in the 90s...

Whoa, whoa, whoa... Gazette has totally revamped the loader menu system to something called "GOS" ("Gazette Operating System")! I posted an example of the old look (the one that has been roughly constant for all 7 years) for October 1989 but now it looks like: 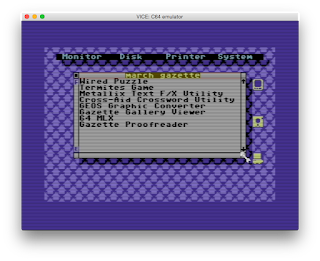 (Actually that's March's... I opened the wrong disk image. Tellingly, the February issue doesn't open up the listing, you have to go to Monitor|Directory. Feels like an oversight they quickly corrected, since the listing functionality was so central to it.)

Yes, I realize not even my blog readers are going to be as "whoa whoa whoa" interested in this change as I was... you know, if this came out to months later I would have thought it was an April Fools. Despite the relative success of GEOS and the disk functions they sneak in here, it seems like overkill - I suppose these computers weren't that much less powerful than early-GUI systems like the first Macs, but still, an odd paradigm shift.
Beautiful but shallow shooter game. The pre-game attract mode, with an awesome tuba-ish pulsing sound and cool visual of scrolling computer gibberish (like an 8-bit version of Matrix "Rain" code) gave me high hopes, but the vertical shooter gameplay itself was 1985-level hollow. Each virus drifts down at an angle and is deadly to the touch and takes multiple hits, but you have a "River Raid" style, one-bullet-at-a-time gun that fire at a quick measured pace if nothing is being hit, but then accelerates into a machine gun as you pour fire into an approaching enemy. Rating:3/5
This horizontal shooter shares Campbell's love of great Sprite graphics and shooter-with-boss-fights we saw in July 1989's Mine Sweeper, but with an interesting twist: your ballcraft is constantly bouncing. You can fire guns to the right but sometimes enemies come from the left, and you have to carefully bounce over and under them. Once the "Distance" bar is whittled down you have a one on one fight with a larger craft that takes a few more hits. A little frustrating that there's an invisible barrier on the right side of the screen that you can't bounce past; I guess 'cause that's where the boss goes. Very challenging game, but the feel was unique enough that I'm giving it Rating:4/5