This blog has certainly stood on the shoulders of giants, the people who did the actual gruntwork of scanning in these magazines and grabbing the .d64 images. But the magazine existed for almost a year before they got the idea of selling the disk with all the programs on. That means there's 10 months of undisked programs. I'm way too lazy to type these in-- frankly the effort/reward ratio, especially of the early games, seems a little low, and also these listings are a mess, super hard to read accurately. (It turns out you could skip many space characters in BASIC listings, and many did that to save the disk space and memory... between that and figuring out the special characters on this keyboard, it seems kind of hopeless.)

But, I thought I'd placate my inner completist by going over the games I missed, listing what they looked like and who made them.

All games for VIC-20 and C64 unless otherwise noted.

Advertisement of the moment: I've always liked this robocat from a Synapse ad, in the premier issue: 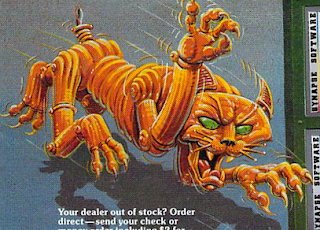 (Also in the premier issue: "Does Your Computer NEED a Cassette Recorder?")
Looks like Atari's Skydiver - fall and maneuver into a landing pad.

Racing a timer, find a path to the exit.

Not a game per se, but can I tell you I love the idea of this? I was kind of fascinated by those ball bearing clocks as a kid, and am often tempted to make up this kind of virtual timepiece. This month it was just for VIC-20 but a (less attractive, as is par) C64 port shows up in November.

I wonder if Snake/Surround "snake roams through halls eating and getting longer and avoiding itself and walls" was a cliche then, or just later. Looks like some thoughtful level design by the father/son author team though.

The accompanying article mentions that because of the extra graphics etc, sometimes the C-64 games would run slower-- looking it up, I realize the VIC-20 and C-64 have about the same clock speed, which went against my assumptions of newer system = faster computer.  (Still the VIC-20 tended to have so much less RAM, and of course no sprites)
Not so original, press the joystick N/S/E/W to shoot your laser at incoming Cylons, or button to fire one of three smartbombs.

Boxart of the Month for September 1983: 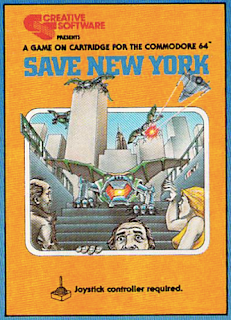 Anyway... on to the games you actually got:

Pretty looking flying around character-based game (I don't think we've seen any games use the C64's sprites, these are generally all VIC-20 ports) Oddly the caption tries to claim that it's the C64 screenshot...
You drive around filling the potholes the computer car makes... contact with the latter is deadly. The C64 port laughably squishes to the left half of the screen only.

Box Art of the Month for November 1983
Whoa.. also for sale this issue, "Tax Pack"- a VIC-20 program for doing Canadian Taxes... interesting.
The "Sky" is falling. You have to throw rocks at it (?) to send it back (??)
A text adventure! The article teases they might publish a map and solution in future issues if there was demand for it. I wonder how much you would figure it out if you typed it in...

Ooh... there's an article about doing special characters, I like these two close-up screenshots: