Ooh, cover and main article of COMPUTE is Windows 3.1... that really is the one everyone was using through most of my college years. 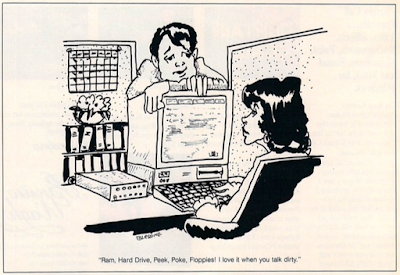 Heh, there's a review of the Commodore game "Back to The Future Part III". Given the recent "Back to the Future 2 Day" celebration, it's funny to realize just how far back in computer history that series was.
This two player only game reflects a strong Paperboy influence. Two milkmen are furiously scurrying up a street... each player has to throw milk accurately on the porch or else the porchlight goes from a delicious milky-white to a devilish red and they won't be your customer next round. You can also throw milk at your opponent (to knock off points) or I guess sometimes the dog charges you and you can use milk to stop that as well. Part of the problem is the timing... since you can only throw one bottle at once, if you miss one house, you're likely to not have time to make the next either. Doesn't feel like a very well-tuned game Tentative Rating:3/5

Cards fly in from the left, and you want to form vertical poker hands. Like with November 1985's Power Poker it's not my thing but I think it seems kind of cool. On the other hand, I can feel some flaws with the interface; there should be a line midscreen where cards start to gather, and if you press sideways to speed up a fall, you can't stop the fall, it keeps on going like on inferior implementations of Tetris. Rating:3/5
Oh, the bonus game is for the 128! (It's so telling that the menu system for 128 is still the old school text one) I think this is only the second game to use the 80-column mode. A sci-fi themed text-based trading game for up to four players. I dunno, I've always said I never like a game where I really want a spreadsheet by my side... (mostly referring to the German table-top games some of my friends dig, but the same idea applies.) Rating:3/5